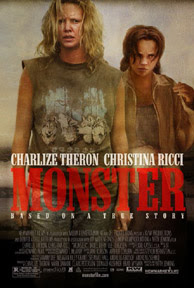 Aileen Wournos always dreamed of becoming a famous actress. But because of her abusive father and grim circumstances, she became a street prostitute at the age of 13. Somewhere around the late '88 she accidentally entered a lesbian bar where she met a lonely girl, Selby. Although Aileen didn't want to have a relationship with a woman, Selby proved to be a very caring and gentle person and they started a relationship. Selby ran away from her conservative home to stay with Aileen in a hotel, but they started running out of money. During her job a street prostitute, Aileen was raped and beaten by a psychotic man in his car; in self defense, she managed to shoot and kill him. Her hate towards men became so big she started killing almost every customer, from a retired cop to a religious grandfather. She was arrested and Selby testified against her in the court. Aileen was sentenced to death.
Some films are just empty vehicles for a great performance by an actor or an actress, and offer little else. Luckily, although "Monster" is also just a vehicle for Charlize Theron's great performance, for which she won an Oscar and a Golden Globe, it's not just one great performance in search for a film. Christina Ricci and Bruce Dern also have their share of excellent moments. Based on a true story, "Monster" is an interesting essay about society that gave up on an outcast, and then that outcast gave up on society, leaving even a few philosophical questions about just who is a monster in the story; Aileen or the cold world around her. In one great scene, Aileen enters a car of an kind and religious old man and decides to shoot him because she thinks that every man is evil. The old man starts praying to God, kneeling, and she for a second doesn't know what to do and if that what she is doing is right. She is a victim of a cruel father, but at that moment she became cruel herself and made a victim out of that old man, thus just continuing the circle of evil. Although "Monster" also has some other virtues than Theron's performance, they are rather thin, clumsy and underdeveloped. Theron is excellent, but it would have been nice if the film contained other qualities that are equally as great and in the function of the story.