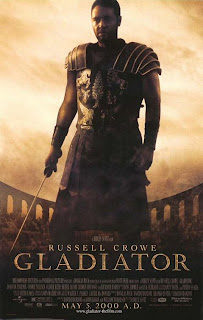 Roman empire, 180. A. C. Maximus is one of the generals in the Roman army, fighting against German barbarians. When the emperor Marcus Aurelius wants to appoint him a temporary leadership, his angry and jealous son Commodus kills him and let's Maximus' child and wife being executed. Maxius ends up being a slave in North Africa and loosng everything. When he reaches the Colosseum as a gladiator he fights Tigris the Gaul and gets into a duel with Commodus in the arena. In a ferocious fight, they both die.

40 years after the end of the era of monumental films, the genre was revitalized in a surprisingly stiff way with "Gladiator", an old fashioned movie filmed like a hasty MTV music spot that became the 4th most commercial film of the year. It also won 5 Oscars and 2 Golden Globes, including in the category for best picture. But unlike other popular monumental films whose main attributes were awe and fascination, "Gladiator" tiresomely fills its overlong 150 minutes of screen time with anemia and dryness, making the viewer wonder when is it finally going to get good or end after every half an hour. "Gladiator" was praised by a lot of critics; in a way, that is not entirely wrong - the story is clear and simple, the set design and costumes are great, the action scenes are pretty good, the viewer can somewhat identify with the main protagonist Maximus who lost everything, and the whole film is solid. But that is it. Leaving historical accuracy aside, "Gladiator" never managed to distinguish itself from the mass of other soap operas or cheap B films from the same genre. Ironically, "Conan the Barbarian", a film with a similar revenge story that was doomed as trash by some of the critics in '82, still seems easily better and more modern than this film. The director Ridley Scott tried to enrich the story and make it look better than it actually is, but didn't succeed because it was simply a thin revenge story written with awfully boring dialogues that were not stimulating - actually, 5 minutes of his "Blade Runner" are worth more than 50 minutes of "Gladiator". In a way, "Gladiator" is a matter of taste, because it plays out like a wrestling film.