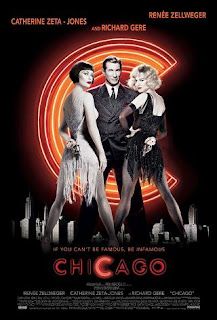 Chicago, 1920s. The famous actress Velma Kelly gets arrested and put in jail for killing her husband and her sister for cheating on her. At the same time, Roxie Hart, an unknown actress dreaming of fame, also lands in jail when she shoots her lover who lied about his ability to get her a job as a performer. Roxie is defended in trial by the cynical lawyer Billy who turns her case into a celebrity event. Soon, the whole town is reading about her trial. But then a new killer, Kitty - a wealthy woman who killed her husband and both of his mistresses - shows up and the press forgets about Roxie. But Roxie manages to "steal" back attention by falsely claiming to be pregnant. Using this lie, she enters the courthouse with Billy. Using some quick talking, Billy manages to get Roxie and Velma off the hook. Much to Roxie's dismay however, her publicity is short lived as the publics attention turns quickly to a new murderess. With nothing left, Roxie once more sets off to find a stage career. In the end Velma and Roxie revive a two person act together and it becomes a stage hit.

One of the weakest best picture winners of the all time, "Chicago" is a bizarre musical patchwork that does not have any back up for winning 3 Golden Globes and 6 Oscars, making it seem like an artistic placebo that was sent from the heavens to help the haters of that awards undermine their reputation. Basically, the story about two murderous women on trial trying to gain sympathy from the media to get bailed out is pretty good, satirical and media unfriendly and could have turned great in some other author's hands, but in "Chicago" it ended up being just an average mild satire with unnecessary musical scenes and plot devices. In all the musicals the singing starts without logic, but in "Chicago" it's incorporated into a system of extremely annoying scenes of characters fantasy; in one of the lamest scenes Roxie is, like a puppet, sitting on Billy's knee who is talking everything for her, while journalists with attached strings can be seen dancing in the background. Camera moves are often hasty, rushed and hip, most noticeably in the sequence of Roxie's intercourse with Fred, while the music is awful and the dance choreography rather thin. Surprisingly, Richard Gere is one of the best attributes of the film as the cynical lawyer Billy ("If Jesus Christ lived in Chicago and came to me, let's just say his trial would have turned out completely different") who didn't drown in the sea of slimy caricature. Ironically, even the only musical episode in the animated show "Daria", called "Daria!", which was weak compared to the series as a whole, contains more wit and sharpness than this film.