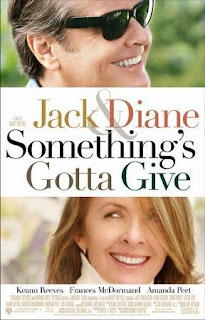 Something's Gotta Give; Romance/Drama/Comedy, USA, 2003; D: Nancy Meyers, S: Jack Nicholson, Diane Keaton, Keanu Reeves, Amanda Peet, Frances McDormand, Jon Favreau
The 63 year old wealthy New York businessman Harry never dated a woman over 30. His newest girlfriend is the 29 year old Marin Barry, who drives him to her Long Island beach house. However, the two are surprised when Marin's mother Erica and her sister Zoe show up and decide to also stay in the house. During a foreplay, Harry gets a heart attack and lands in a hospital, where Dr. Julian asks Erica out on a date because he is a big fan of her plays. In order to rehabilitate, Erica agrees to keep Harry in her house for a few weeks. After Marin dumps him, Harry finds out Erica is actually pretty handsome and charming for an "old lady". The two of them get closer, but he leaves her. Some time later, Harry regretted his decision and went to Paris where he found Erica is still in a relationship with Julian. But then she quits with him and admits Harry that she still loves him.
"Something's Gotta Give" basically has only two real virtues; Diane Keaton and Jack Nicholson. Their charisma lifts the otherwise average and thin story into something mildly successful. It's a shame since the humane and touching story could have potentially been better, like Nicholson's similar film "As Good as it Gets", instead of just an overlong, casual tragicomedy that's at some parts even close to being a soap opera. Nancy Meyers direction isn't sharp enough and she misses a lot of opportunities to enrich the plot - for instance, the funny premise of the main protagonist, the 63 year old Harry, who never went on a date with a woman older than 30 could have been exploited more, instead of just being dropped right after the start - and a lot of things seem contrived. Still, even as a flawed film, "Something's Gotta Give" is an interesting take about unconditional love, the one that knows no limits or age, and some scenes are pretty good. In one of them, Erica, after Harry left her, is crying for days but has at the same time inexplicable inspiration at writing her play, causing a very funny punchline how one can use pain and make something usefull out of it by analyzing it into art.