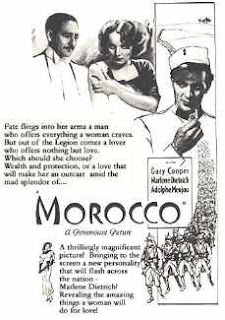 Morocoo; Drama, USA, 1930; D: Josef von Sternberg, S: Marlene Dietrich, Gary Cooper, Adolphe Menjou, Ullrich Haupt
Tom Brown is a soldier in the Foreign Legion marching through Morocco. One they his division settles down in Mogador, just as Amy Jolly, a singer from Europe, comes to town too to work at Lo Tinto's cabaret. During her stage and singing act, dressed in a man's tuxedo, Amy catches Tom's attention, but also Monsieur La Bessiere's attention. Having to choose between two men, Amy obviously prefers Tom, who one day gets arrested when causing a fight with local inhabitants, but also gets released fairly quickly. One evening Tom promises Amy to leave the Legion for her, but then he suddenly changes his mind and goes with his division for a dangerous mission in the desert. Amy then decides to start a relationship with La Bessiere, but leaves him instantly when she hears Tom has been injured during an assignment. The news proves to be false since Tom is alive and well, and Amy once again pretends to not love him. After Tom sets on to march with the Legion in the desert, Amy suddenly leaves to town and follows him by foot.
Josef von Sternberg's brilliant directing skills and wonderful atmosphere lift "Morocco" from it's thin, soap opera like core, but in the end it simply remains just a skillfully made soap opera. The story about a woman between two men could have been written and crafted in much more complex directions, but the final product offered here is more than worthy of being recommended for it's determination and Marlene Dietrich's absolutely brilliant acting. In one of the best scenes - and the film should have had contained more of them - Dietrich's character Amy, a singer, dresses up in a man's tuxedo and performs a singing act in a cabaret. At one point, Amy comes to a table of one of the guests and kisses a woman in the mouth, taking her flower and giving it to Tom. The sheer fact that the authors made such a "controversial" gay reference and got away with it shows that they are capable of being original without a compromise. Even a few clever details show up here and there, like when Amy's necklace gets stuck on a chair and ripped off, but she doesn't stop to pick it up because she heard her beloved Tom is hurt. "Morocco" is an exotic, stylish, but overstretched drama that in the end doesn't live up to it's promising potential, but it's unusual in taking a deep look into two cursed people who can only love each other when the other pretnends he or she is not interested in the other.
Grade:++
Posted by Marin Mandir at 9:47 AM