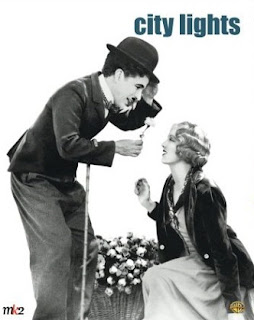 A tramp, broke and homeless, meets a poor blind girl selling flowers on the streets and falling in love with her. At the same time, she accidentally mistakes him for a rich man. Since he wants to help her and doesn't want to disappoint her, he keeps up the charade. He also saves the lie of a drunk millionaire who wanted to drown in the river and they become friends - at least only while he is drunk, because he can't remember him when he gets sober. The tramp works small jobs like street sweeping, and enters a boxing contest, all to raise money for an operation to restore her sight. A casual gift of a thousand dollars from his drunken millionaire friend makes the operation possible, but things go wrong and he is mistakenly accused of stealing the money. Before he goes to jail, he gets the money to the girl. After being released, the tramp spots the girl who can see now. But she can't recognize him, until he speaks.

"City Lights" are probably the best film from Chaplin's silent era, who, unlike his colleague Keaton, took equal care in both the comical and the emotional department. Chaplin's way of film making is rather uneven at times, since his infantile side today seems sometimes dated and unnecessary (for instance, the sequence in which the tramp accidentally swallows a whistle and makes whistle sounds during his hiccups; the eccentric drunk millionaire who recognizes the Tramp only while drunk). Still, despite the flaws, the simple story about humanity is both easy and deep, the rhythm and style of the gags are meticulously graded based on the pantomime's universality of gestures (the hilarious boxing sequence) whereas the powerful, touching and romantic open ending, in which the blind girl sees the tramp for the very first time, was truly consequently incorporated into the pantheon of cinema history.