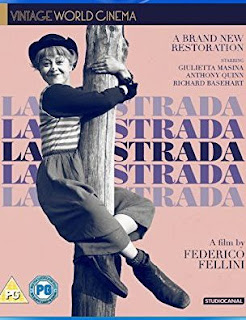 Zampano is the only member of a traveling circus act, entertaining the audience and displaying his strength by breaking the chains he binds on his body. For 10,000 Lire, he buys the young, slightly mentally limited Gelsomina from her widowed mother. He intends her to help him with the performance. While they are driving in an improvised vehicle from town to town, the two of them raise and unusual relationship: she is accessible and optimistic while he is cranky and pessimistic. While trying to escape, Gelsomina meets Matto, another entertainer who constantly provokes Zampano. During a fight, Zampano accidentally kills Matto so Gelsomina slowly looses her sanity. Zampano leaves her, but years later, when he finds out she died, he starts crying on the beach.

Unlike many of his grotesque ephemera films, Federico Fellini's "The Road" works in almost every aspect and is pure magic. One of the best movies of all times, a thematically and stylistically perfect achievement, this magnificent masterpiece of the Italian maestro is an unusual and unusually beautiful achievement from the Italian 'neorealist' era that actually breaks all the rules from the standard dramas because it consists just of little gestures, movements, looks and metaphors between the two main protagonists, opposite as day and night: the grumpy, pessimistic Zampano and gentle, optimistic Gelsomina. Despite all of Anthony Quinn's effort, the main star of this simple fable is the excellent character of the naive Gelsomina (brilliant Guilietta Masina) who is one of the best female characters ever to appear on celluloid, acting sometimes like a female Chaplin: in one scene, when Zampano puts a hat on her head she starts mischievously jumping left and right, and when he gives her a drum, she starts spontaneously tapping it with her hands. Since she keeps announcing the act incorrectly again and again during a rehearsal, he goes to a bush, plucks a twig and gently hits her leg. Maybe Gelsomina is so fascinating and special because she is a symbol for innocence that interacts with a brute, and thus this goes through a whole specter of emotions in the backdrop of ironic scenes (she starts crying, but is "interrupted" when she falls through a hole in the ground; she spots a tree with a branch and imitates it with her hand). But this is just the way this little, understated film is: its emotions are somehow far more engaging and mind-blowing than numerous big budget spectacles. Fellini took the mundane streets and turned everyday Italy into a magical wonderland: truly, a shining achievement.