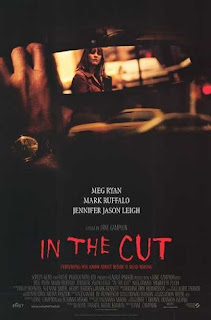 New York. Frannie is a high school teacher writing a dictionary of urban slang. One day, she enters a bar and spots a man with a tattoo on his hand enjoying a fellatio from a girl in the dark corner. Frannie leaves, but soon discovers the girl was killed. She meets detective Malloy and starts a passionate relationship with him, but suspects he may be the murderer because he also has a similar tattoo on his arm. After new murders occur, she panics and handcuffs him in his apartment, escaping with his police partner Rodriguez. But then she discovers Rodriguez is actually the murderer and manages to kill him.

"In the Cut" is a standard whodunit mystery thriller covered in the form of a (semi-erotic) drama that was unanimously denounced by critics. Truly, the film doesn't have much going for it, but thanks to the talented Jane Campion's directing abilities it's still for a level more esoteric and quirky than it would have been without her: actually, the catastrophic finale is the only reason why in the end it seems worse than it actually is. Campion fills the story with surprising, unusual little details from life: when Pauline and Frannie are exiting their apartment, a person says "Good day" but Frannie doesn't respond. That causes Pauline to ask her: "Why didn't you greet back"? Truly, that's something that's not seen in every film, maybe because the directors think it's not important, but it says a lot about the characters. In another scene, Frannie is in a subway while two men are carrying a giant wreath in form of a heart that says "Mom". John (Kevin Bacon) spots dog's feces on the street and picks it up with his glove, then turning the glove inside out to capture the content. Surprisingly, although the flawed and chaotic story may seem anti-feminist, it was actually written by a woman, Susanna Moore. Meg Ryan's performance was a very unusual departure from her sweetish image: she plays a tough, calm woman, and even appears nude in her erotic scene with Mark Ruffalo. Although some have also denounced Ryan's appearance, she actually gave one of 2-3 best performances of her career.