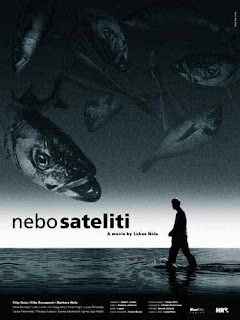 A mysterious blond man gets the name Jakov Ribar in order to get exchanged with other prisoners and released to freedom during the war in Croatia. Jakov is walking on water and through a mine field, arriving at a house where some guy called Johnny lives. The next day he meets his friends, the soldiers, who die in a battle. Jakov continues his journey and arrives at a hospital where some woman falls in love with him. But he leaves, claiming not to know who he is. He joins some two pilots in their plane, but when it crashes all die except for him. Jakov continues his journey and spots a lot of dead in the war, which makes him sad. In the end he steps into the sea and looks at the sunset.

Mythical and unusual art-drama "Celestial Body" is a minimalistic film without a story that won 4 "Golden arenas" at the Pula film festival, while some have even called it "the best Croatian film of the decade", but that's a gross exaggeration for a film that takes strange directions that slowly but surely crystallize mild disappointment. The most fascinating aspect is the mysterious main protagonist, a nameless man with childlike innocence: could he be a symbol for a intellectual or a visionary in a society of fools and chaos, which is interesting, or even an angel from above that is slowly traveling through war hit areas and sadly watching the foolishness of people? In the end he even steps into the sea and looks at the sunset - the end of the world? Still, for all of that observations, many come from a suggestive tone and just from the pigment of the viewers imagination, while the hero is a one dimensional character and Filip Nola is miscast in the leading role. When the supporting actors are leading the storyline more than the main protagonist himself, then that's a bad sign. Emotions are rather underplayed causing in a cold mood, many scenes seem uneven and the fantasy side is weak (the only miracles the hero does are walking on water and healing the paranoid people). The second aspect is the esoteric style: there are two kinds of metaphysical stories - ones are empty, the other ones are rich and multi layered. The film tried to combine them both, but ended seeming more like the first than the second, though the demanding viewers might rather enjoy this meditaton about war and life. If anything, "Celestial Body" shows that it's really hard to make a deep film about an autistic, mysterious hero that stirs up a shallow society, like in the much superior classic "Being There".