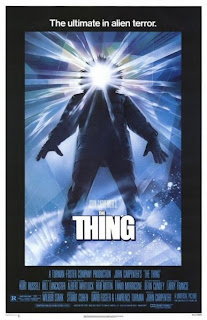 South Pole. Two Norwegian researchers are from a helicopter shooting at a dog. In all the chaos they accidentally stumble upon an American research team and wound one the members in the foot, causing the men from the base to kill them in self defense and adopt the dog. In order to find out why the Norwegian crew reacted in such a bizarre manner, pilot MacReady and Dr. Cooper fly off to the Norwegian research base, but to their shock they discover dead members and an alien spaceship burrowed under the snow. Back at the American base, the dog turns out to be a deadly alien that can change its shape into every living creature, and mimics human crew members. The alien kills many of the crew and transforms into engineer Blair, so MacReady blows p the whole station.

John Carpenter filmed this remake of his beloved film from the 50s "The Thing from Another World", creating one of the scariest horrors of the century. Subsequently, "The Thing" was revived by a number of critics, even somewhere getting placed as one of the best films of all time, but without much to support that claim: Carpenter succeeds (and exceeds) more in shock and suspense department than he does in creativity and sophistication. The main plot revolving around a mysterious shape-shifting "chameleon" alien that eventually transforms and mimics humans is an interesting allegory about the "invisible enemy" within, and it is a pity that its messages were not handled with a deeper symbolism. On one level, this allegory works: during imperceptible dangers, when the enemy cannot be clearly identified, such as pandemics (the coronavirus outbreak or AIDS appearing in the 80s) or an ideological spread (when anybody could be a secret Communist during the Cold War, for instance), the paranoia is heightened and the people are taken over by the urges of fear and anger, since anybody is suspicious, while reason is dismantled.

On the other hand, several plot points in this concept are somewhat illogical or underdeveloped. For instance, in a later TV series, "Claymore", there is also a shapeshifting being that "disguised" itself as Raki's brother at their home. When the shapeshifting monster reveals its true form, it hesitates to attack Raki for a moment, since the traces of his brother's mind are still subconsciously resisting harming Raki. It would have been interesting if "The Thing" also had such moments of the alien resisting while transformed into an intelligent mind, since he has a mind of a friend of the scientists. Likewise, it is unclear why, if the alien can be a human and thus survive by simply eating normal food, it would not simply stay in this more comfortable form, instead of trying to eat other humans in bloody and dangerous attacks, risking to reveal itself. The characters remain disappointingly one-dimensional, not real people. Too many of them are unmemorable, with only Kurt Russell's, Richard Dysart's and Wilford Brimley's characters managing to stand out, while others just die as mere extras. The location of the South Pole created a chilling, isolated mood, while the paranoid story conquers with the director's iconography that realizes one intriguing scene after the other: when the alien "dog" transforms into an anamorphic, organic mass, it starts attacking real dogs with its tentacles, while the heroes are observing a video tape of Norwegian researchers showing how they found a UFO in snow. The special effects and make up of the alien are amazing, especially during its inconceivably grotesque transformation during the blood test sequence, and even today it is difficult to figure out how it was done.