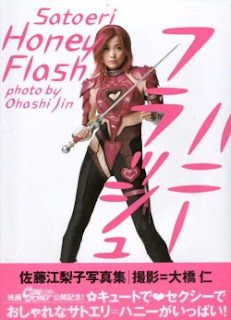 Honey Kisaragi seems like a normal girl, but in reality she is actually a robot, revived by her deceased father when she died in a car accident. She can transform into Cutey Honey and disguise into anyone. When her uncle Utsugi gets kidnapped by the evil Panther Claw, she rescues him but gets in trouble with that organization. She also meets Seiji, a journalist, and Aki Natsuko, a female police officer, and becomes friends with them. The Panther Claw organization pops out in a giant tower uder Tokyo tower. Honey fights them, but their master, Mistress Jill, wants to merge with her cells to prolong her life. But Honey stops her and explains that love is more important.

Hideaki Anno's Live action adaptation of the animated show "Cutie Honey" is the golden standard of those kind of movies. Totally wild, hip, madly amusing, trashy, filled with unusual camera angles and extreme cartoon style, "Cutie Honey" is probably the best possible adaptation of the animated series, showing how one director can stay faithful to the original and his own style at the same time. It's a "guilty pleasure", but after seeing only 1 minute of it, you instantly become hooked and want to see it all: in the exposition, Honey Kisaragi (attractive and cute Eriko Sato) is taking a bath when she gets a phone call that her uncle is in trouble. She jumps out, puts a towel around her body - but can't transform because she doesn't have "enough energy". So she goes out of her house, running childishly-naive in her underwear through the street while people can't believe what they are seeing! Sato does her job proudly in every scene, no matter how embarrassing, bizarre or close to a male fantasy it seems, while the fast editing has a tight rhythm. The movie is full of mad special effects that make the characters' movements as close to animated movement as it can get - in one scene Cutie Honey kicks one evil henchman and throws him 20 feet in the air, in another she drags the female police officer Aki Natsuko on the ground to safety. And there's a cute wink when Honey falls with her bottom on the car of one old guy and says: "Look, Go Nagai!" (The creator of "Cutie Honey" Manga). The story and characters are rather thin, while the finale is so much over-the-top that it's without measure, but all in all, since Anno put so much effort into creating a whole new artificial world that's comedy first and drama second, even that seems cute as honey.

OH.MY.GOD. I had no idea there was a live action version of that manga! And it seems like it's good fun after all (I'm not a fan of live action adaptations of fantasy'sci-fi mangas, they often look cheesy).

Thanks for the heads up!