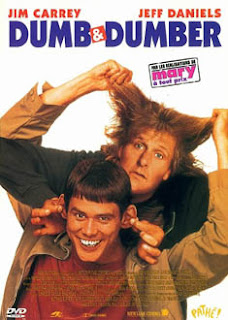 Lloyd Christmas and Harry are two dumb friends who can never find and keep a job because they are simply too stupid. As Lloyd was working as a limousine driver, he fell in love with Mary who deliberately left a briefcase in the airport - which contained ransom money for her kidnapped husband. So Lloyd and Harry set out to Aspen to return the briefcase to her. On their way they cause chaos, but upon arriving in Aspen they find Mary and help the FBI catch Nicholas. They return home and turn down a chance to join bikini model girls in a bus.

Vulgar comedy "Dumb and Dumber" has subsequently gained cult status and a large number of fans calling it amazing. Those viewers who can enjoy some really crude humor and mean spirited gags will probably find the film hilarious, yet those terrified by such gags as Lloyd igniting a fire by farting, a dream sequence where he rips a heart out of the chest of a Chinese cook, broken parrot's head and spiting in a sandwich, will probably have trouble enjoying it. The movie offers a few good-good gags at the beginning, good-bad in the middle, just to loose itself in the sea of pointlessness with bad-bad gags towards the end. Jim Carrey, who always likes to "enrich" his every sentence and gesture with grimaces, is terribly irritating at times, the movie is overlong, the jokes are by today's standards predictable (the scene where the endangered owl gets killed by a cork of champagne that Lloyd opened) or painfully forced while the worst incorrect joke remains the one where Lloyd and Harry accidentally kill the agent by mistakenly giving him rat poison instead of his pills. As a set of gags, the movie is funny for those who like really devastating humor and occasionally has a few comical lines ("One time, we successfully mated a bulldog with a Shih-Tzu...we called it Bullshit") due to it's over-the-top exaggerated tone, but as a film it could have been better. Ironically, another movie also revolving around a mentally limited hero released the same year, "Forrest Gump", is today rightfully appreciated more. It's a pity, because the Farrelly brothers are actually one of the few good directors of toilet humor because they have a humanity for their heroes, but even this film has its virtues.