A League of Their Own 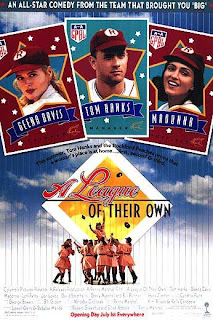 Old Dotti is traveling to visit her friends, remembering her life: in the 1940s, when the mobilization for battles in the World War II led to the shortage of men, a woman's baseball league was founded. Dotti's sister Kit talked her into accepting an offer to join the league. The two them were always arguing, while their trainer Jimmy let them do what ever they wanted because he hated working for a woman's league, on top of called "Peaches". The quirky Mae was also a member. Despite their popularity, the championship was won by a rivalry league where Kit transferred to. Dotti's husband returns home and they start talking.

Very amusing light comedy "A League of Their Own" managed to combine two conflicting things; baseball and women, and blend them together as if they were completely compatible. It's a simple sports story, the best film director Penny Marshall ever made, that offered amusing humor, subtly touching emotions, intriguing mood and a rather ironic jab at the male chauvinism, raped up in rather clever Hollywood entertainment. The movie is truly very good, but it made a few mistakes in the underdeveloped relationship between the characters Jimmy and Dotti played by Tom Hanks and Geena Davis, and it needed more satirical scenes like the one where the girls are throwing baseball balls at the caricature of Hitler. Among definitely hilarious situations is is the one where Jimmy is sleeping in a bus when an old lady comes close to him and shouts: "Wake up!", upon which he suddenly snaps and kisses her! An interesting ad compact achievement, slightly too light and unambitious, but so good that even Madonna's role seems authentically charming and cute. The best role was delivered by Geena Davis, who was nominated for a Golden Globe as best actress in a motion picture musical or comedy, together with the song "This Used To Be My Playground".