The Treasure of the Sierra Madre 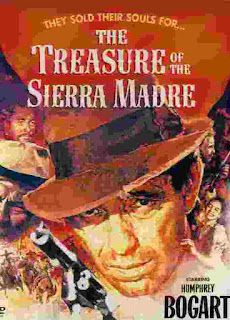 In some Mexican town, two young adventurers, Fred C. Dobbs and Bob Curtin, are due to monetary troubles forced to team up with the old man Howard and head up to the mountain Sierra Madre in the hot desert in order to dig and search for gold. Despite an attack by some renegades, the three of them manages to find a substantial amount of gold and set to go home. But, on their way Howard heals a sick boy in a village and it's inhabitants invite him for a visit. Leaving his share of gold at Dobbs and Curtin, the two of them start arguing until greed causes them to see each other as the enemy. Dobbs shoots Curtin, but gets killed by some bandits. The gold is gone and Howard returns to his village.

A magnificent masterpiece, "The Treasure of the Sierra Madre" is one of the best movies of the 20th Century, a thoroughbred adventure film that shows how little it takes to make a great film - just three people and some gold that corrupts them. Undated, still incredibly fresh, simple, straight forward and indescribably interesting, the film is build on fantastically convincing dialogues and masterfully portrayed characters - rarely was the theme of greed executed so powerfully and intense that it gives an everlasting quality to a film. John Huston directed the simple plot in a virtuoso way, giving interesting insights - Curtin and Dobbs are practically friends at the beginning of the film, with Curtin even saving his life in the gold mine, but once the greed strikes them because both are afraid the other one will steal the other's gold, they completely change and become enemies - Dobbs even waits for him to finally fall asleep, after nights of monitoring, so he can gain the upper hand. The greatest role was achieved with Walter Huston's character of Howard, who has an endless supply of wisdom and inspired dialogues. Not to mention the classic line from Gold Hat: "Badges!? We ain't got no badges. We don't need no badges! I don't have to show you any stinking badges!" Back in 1948, it was really unusual to give Humphrey Bogart the role of the shady Dobbs, but looking at it today, the casting seems perfect. It was equally unorthodox to have a story without a villain, since that was the intention: to show how even the hero can become a bad guy if he allows selfishness to take him over.