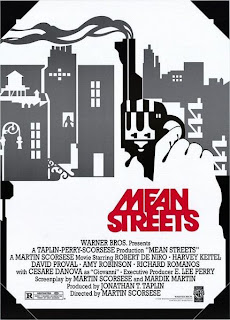 New York. Charlie, an Italian-American, wakes up in the middle of the night. He is a small time crook who works for his uncle Giovanni by collecting debts from restaurants, but since he was raised religiously he feels remorse: he goes to church to repent and puts his finger in the fire to punish himself. His friends are mafia gangsters Tony and Michael, who take money from naive youngsters who want to buy firecrackers and simply run away, and crazy Johnny Boy. Charlie protects Johnny who owes Micheal a tone of money and yet wastes all his savings on alcohol. Charlie also has a relationship with Johnny's cousin Teresa, who suffers from epilepsy. All three run away after Johnny refuses to pay his debts. Mafia kills Johnny and Teresa in a car crash.

Martin Scorsese's third feature length film were "Mean Streets", an incredibly dynamic, smooth and powerful crime drama that's a whole geyser of a young director's energy, yet his unsure tone made it turn out slightly confusing and chaotic. Most praise went to Robert De Niro in the role of mentally unstable Johnny (on the roof he shoots at a lighted building a mile away in distance to "turn off the lights"; he blows up street post boxes with a bomb...) but it's a pity that many unjustfully ignored excellent Harvey Keitel in the leading role of Charlie, a man struggling between his Catholic moral and criminal job. "Mean Streets" are an unusually pessimistic ballade that ostensibly handles Scorsese's often theme of mafia and realistically crystallizes problems of the slums of New York, where people are ignored and forced to live on the margins of society. The unorganized, but strong story is full of surprising outbursts: for instance, in one scene Charlie is sitting in a pub and starts talking with his friend, but in the middle of the sentence they are interrupted by a sudden fight of two lunatics behind them (!), so he turns around and starts calming them down or when a Vietnam veteran starts manically pounding on the table when he spots an Asian woman in the bar, so people have to take a grip of him. Scorsese's typical distanced relationship towards his characters once again seems bothering - as if he hates his figures but still can't resist not to make movies about them - but his visual style is simply fantastic and many of the camera tricks found here were later copied a thousand times in many sterile music spots (for instance, a tight close-up of a character's face while the whole room in the background is moving).