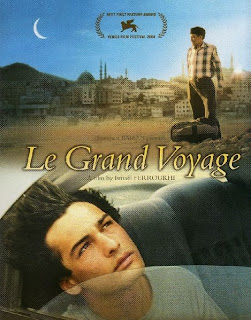 Reda, a French teenager of Moroccan roots, is persuaded by his old father to drive him in a car from France to Mecca in Saudi Arabia for his pilgrimage. Reda is reluctant because he has to study for his exams, but still complies. The 3.000 mile trip is bumpy: his father is stubborn and rushes him to just drive on and on, even though Reda wants to visit such towns like Milan and Venice. They sleep and eat in the car. Somewhere around Zagreb, they get lost because the father wanted to take a "shortcut" to Belgrade. They give some old lady a ride and spend the night in a Serbian hotel. Around Sofia, the father gets sick and has to be brought to hospital. On Turkish territory, they get robbed by Mustapha and drive discouraged to Damascus. Finally in Mecca, the father goes to a pilgrimage and dies.

In the long list of interesting unknown independent films, road movie "The Big Journey" stands out with it's unbelievable concept: it follows a father and a son who drive in a car from France to Mecca (!), subtly here and there portraying their relationship with little details and obstacles they have to prevail. The week long trip of the protagonists is enriched with many comical moments: the blue car has one shabby orange door; the father wants to pray when the car stops at an Italian custom; when they get lost on the road to Belgrade they meet an old lady who simply sits on their back sit and wants them to drive her; they meet a Serbian police officer who wants to see their documents; after they get robbed by Mustapha the father brings out his "emergency money" he hid inside his belt (!); they want to eat a sheep near Damascus but it runs away...First time director Ismaël Ferroukhi crafted a neat, simple and raw allegory about the relationship between the father and son that starts off cold but gradually becomes warm and full of understanding, showing a lot of sense for landscapes and respect for the 10 countries the two heroes pass by in their car, allowing room for improvisation and spontaneous moments. Even for non-Muslims, the journey and arrival to Mecca will seem like a journey revolving around spirituality, serving as a symbol for the ultimate goal in father's life, but the director also showed equal understanding for the slightly secular teenage son Reda, played very well by Nicolas Cazale. Even though it's slightly too thin and compact, "Journey" is a quality made film with enough spark to intrigue.