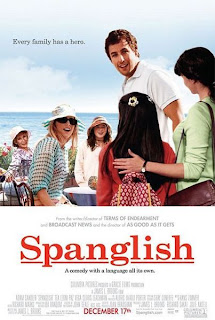 Little Cristina and her mother Flor leave their Mexican town and as illegal immigrants manage to settle down in Los Angeles in search for a better life. Flor finds two jobs, but decides to take care of her daughter more so she accepts only one job, as a housekeeper in the home of the wealthy Clasky family. Since Flor never learned English, it's hard for her to communicate, but the family is dysfunctional even without her: dad John is a prestigious cook who has a hard time with his nervous wife Deborah who always complains about something, including their children Bernice and Georgie. During the summer Flor accepts to move in the Clasky's mansion together with Cristina. John is then surprised when Deborah admits she had a secret affair with another man, so he takes Flor out on a diner and kisses her. Flor leaves together with Cristina in a bus.

James L. Brooks is one of the rare Hollywood humanists of his time and it's a pity his drama/ comedy "Spanglish" somehow simply didn't do justice to his style and caught him on wrong foot: at best, it's can be described as an interesting effort in futility. "Spanglish" has all the typical Brooks trademarks that made wonders in his previous achievements, especially the emphasis on character development and his sympathy for imperfect heroes who always do something wrong, and the unusual plot about a Spanish speaking immigrant woman who has to cope with an English speaking L. A. family also has potential, but only in the first half. With time, this gentle movie simply makes to many missed opportunities, chaotic decisions (when Deborah admits to John she had an affair some 30 minutes before the end of the film, it all comes completely out of the blue since it was never even hinted at during the whole story; the ending seems to be without a head or a tail...), too short or pointless scenes (what was the point of Deborah running after Flor after their children entered the school bus?) and vague coordination of dramatic structure that doesn't come together or points out what it wants to say. Only at moments does Brooks show his good old magic sensibility for human caprice and relationships, like in the scene where Deborah brought too small clothes for her daughter Bernice who is slightly overweight in order to "motivate" her to loose weight so that she can wear it, but actually makes her miserable, which saddens Flor who secretly at night sews those clothes and makes them larger, pleasantly surprising Bernice who finds out that it actually fits her. There are themes of problems with human communication present, and it's refreshing to see Adam Sandler in an intelligent role, yet, sadly, the film seems pale and only moderately poignant.