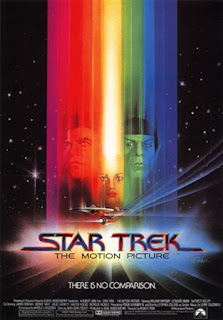 23rd Century. A mysterious energy cloud has passed through the Klingon space and is heading right towards Earth. Admiral James Kirk is sent to the restored Enterprise ship to intercept it, replacing the angered Commander Willard Decker. Joined by Dr. McCoy and later on by Mr. Spock, they start the flight towards the cloud. The Enterprise enters the cloud and discovers it is controlled by a living machine, V'Ger, who takes control of one of the crew members, Ilia, claiming it will destroy Earth if it's creator doesn't respond. The crew discovers V'Ger is actually NASA's Voyager VI who was brought to life by a robot race. It sends him the data it wants, but it merges Ilia with Decker and dissolves. The crew leaves for new adventures.

The first "Star Trek" film wisely abandoned the campy feel of the famous TV show from the 60s and chose a serious, plausible and semi-tight plot enriched with opulent special effects and set-design, yet failed to transport the charm and fun of the original on the big screen, resulting in a boring and too dark film with pseudo-philosophical inter tones. Director Robert Wise inserted some virtues, but the film's biggest problem is it's chaotic structure and plot holes: the basic premise is that a mysterious energy cloud is heading towards Earth and that Admiral Kirk is rushed to the still unprepared Enterprise to intercept it because "the Enterprise is the only spaceship available". Now, that's really hard to believe - the whole Earth has only one spaceship ready and it doesn't even function properly? There is also one scene that really has no purpose at all - it's the one where two people can't get teleported to the ship because of a transport malfunction, causing them to get deformed and disappear. Kirk tried to prevent it, but failed, and there is even a voice that tells him that they "luckily died soon". But Kirk just says "Send my condolences to their family" and the movie just goes on.
The scene is problematic because it doesn't have any purpose in the story - it left a bitter taste by leaving Kirk look like a moron who killed two people by complete blunder and went into some "The Fly" shock territory without any reason at all. The two dead people are not even mentioned later in the film. Moving on, there are further problems to be found - the Enterprise is sent to intercept the cloud, but Kirk obviously doesn't have a clue what to do - he just rushes things without any strategy. Once the Enterprise gets into the cloud, he doesn't have a clue what to do next. Sadly, it seems the writer unwillingly tried to make Kirk look like a misguided leader more than create a meaningful story. On the upside, the story tried to abandon action sequences in space in favor of a slow, calm and almost meditative imagery, like in the fantastic scene where Mr. Spock travels in his space suit directly into the cloud, amazed by a replica of V'Ger's home planet and phantasmagorical colors, reminiscent of "A Space Odyssey". Sadly, Mr. Spock is really underused, even though he stayed an immortal figure of the 20th Century and the film helped Leonard Nimoy to get nominated as best supporting actor at the 1979 Saturn Awards. The ending also doesn't have any sense, even though it offers a neat plot twist at discovering V'Ger's identity, and too obviously tries to copy the "Odyssey", making "Star Trek" just a solid prototype film where the poster looks better that the film itself.