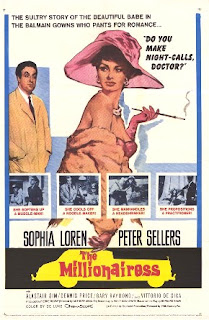 Epifania Parega inherited a multi million fortune after her father died. She marries the young Alastair, but decides to divorce him since her father's last wish was to test her future husband: she will give him 500 pounds, and he has to make 15.000 in three months. Depressed from loneliness, Epifania tries suicide by jumping into the river, but meets Indian doctor Kabir. When she throws her psychiatrist Adrian into the river, she meets Dr. Kabir again, but he ignores her, which fascinates her. In order to gain his attention, she builds a huge clinic and tries to hire him, but he is a humble man who likes his job. Not only that, his mother made him do a similar test for his potential wife Epifania's father did. Just as Epifania wants to give up, Dr. Kabir kisses her and they become a couple.

Dated, but sympathetic comedy "The Millionairess" is a neat, gentle and light little fairy tale about the opposites of love and money. In this case, Sophia Loren stars as the materialistic, Capitalistic Epifania who wants to find the man for life, but her obsession with success doesn't leave enough room for real love, while Peter Sellers stars as Indian Dr. Kabir who is her exact opposite, a socialistic and humble man who doesn't care about wealth. Their chemistry is the main reason to see the film, which doesn't hold on pretty well, even though it's screenplay was nominated for a BAFTA. Director Asquith's skills are not inspired enough and the Proscenium perspective of the camera makes it stiff, like most movies from that era. Still, some of the gags are neat (like the scene where Epiafania imagines she is talking to her deceased father whose voice is coming from one of his painting, then from the second, then from the third) while others are even really funny. In one of those hilarious moments, patients are trying to get accustomed to Epifania's new, highly modern, but highly bureaucratic clinic. In one montage, nurses are constantly asking patients the same questions: "Age? Your father's occupation? Your mother's occupation?...Age? Your father's occupation? Your mother's occupation?" Until the moment where one nurse asks a masculine, middle aged lady: "Your gender?" The angry lady protests and decides to leave the clinic and return back to her good old Dr. Kabir, saying to her friend: "Imagine that! They asked for my gender!...That's none of their business!" If at least there were more such great gags, but Sellers and cute Loren are in great form, and despite the silly story the film presents is in a fairly decent way.