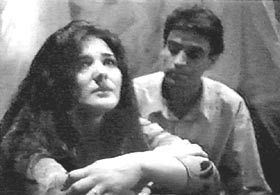 Damascus. Salem is a young guy studying law and working as a mechanic and as an extra in theater. He stutters slightly and feels cornered because he lives with his huge family in a small apartment. Since he is secretly dating Nada, a young widow, he persuades his friend Adel to lend him his apartment for 2 hours so he can be with her alone. Nada is late because she imagined one of her stern brothers followed her, but still shows up. Alone in the apartment, Nada is at first nervous in front of Salem, but then loosens up and take her hijab off. He kisses her, but back of and proposes her. She accepts and talks with him about repressed people. He plays out one of his theater roles in a room and later on kisses with her after they fix Adel's bed. They are interrupted when some men claiming to be from the police arrest a blind neighbor without a warrant: Salem tries to stop them, but they hit him and leave. In the end, Nada leaves the apartment and Salem follows her, each going their own way.

Syrian humorous drama "The Extras" is a truly unusual social study, one which really doesn't follow the expectations of viewers: for one, after the exposition, almost 95 % of the story plays out on only one location, in one shabby apartment, practically only revolving around two protagonists, Salem and his girlfriend Nada (excellent Samar Samy), creating an interesting 'kammerspiel'. For other, the film is filled with Salem's wild fantasies, creating an extroverted mood unusual for introverted mentality in the area: in one scene, he imagines he punches three agents and catapults them on the wall, in the others he is daydreaming of cuddling with three girls in short negligees in bed or even on the floor kissing a woman who wears a G-string! Such erotic and tricky scenes were one of the reasons Nabil Maleh's film was banned in Syria for some time.

But even though some of Salem's fantasies seem as if they came from an American comedy and the story is rather relaxed, the film is still mature, ambitious and clever, going on until the finale where it finally reveals it's main theme: people longing for freedom because they feel trapped in their society. Namely, Salem - an extra in theater who plays the leading role in this film, in a neat metafilm idea - is constantly nervous and on the look out, fearing someone might enter into the apartment and discover him with Nada. In the apartment, however, they feel safe and free, a place where they can relax and be themselves. It's not an accident Nada in one scene says that "people don't need bars to be trapped". But Maleh directed his messages incredibly subtly, smooth and unobtrusive, pretty often including cheerful and humorous moments (for instance, when Adel's fiance enters the apartments and constantly babbles without end, while Salem and Nada don't even get a chance to say anything). "The Extras" are a quality made drama with food for thought.