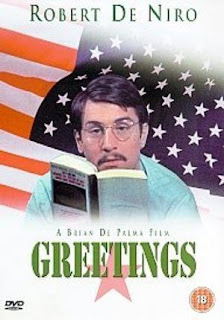 New York, 1968: the war in Vietnam never seems to end, causing the government to keep on drafting citizens. Three young friends; John Rubin, Lloyd Clay and Paul Shaw, are trying to avoid that. Their method is simple: Paul will introduce himself to the psychologists as a gay fanatic and John as an violent right wing extremist. Paul in the meantime arranges four dates with girls he met through the computer, but none of them is successful. John persuades a girl to strip in bed while he films her under the pretext he is making an artistic film. Lloyd is obsessed with resolving the JFK assassination and doesn't believe the FBI, until he gets shot. John lands in Vietnam, despite all of his efforts, where he is observed by a journalist – he keeps on filming Vietcong woman and persuading them to strip.

Earlier film from Brian De Palma, low budget achievement „Greetings“ is today a forgotten, but still interesting and quirky black humorous comedy for adult public. The whole film is made in a raw way, almost as if it was home made: with shaky camera, long takes, documentary feel, spontaneous moments and clumsy actors – including a young Robert De Niro – but that didn't prevent De Palma to make enough clever directorial interventions, like when he censors the words of Gerrit Graham with a loud beep. He also neatly covered up the fact that the story is non existent, De Niro is pretty good as a comedian and the film is one of the first ones to mock youngsters trying to avoid getting drafter for the Vietnam war, obvious in the fact that Paul pretends to be a gay fanatic and John as an violent right wing extremist. Still, the film as a whole isn't that funny that seems heavily overstretched, causing it to become boring and overlong at parts, while it's also a little pity the authors didn't concentrate their efforts more on satire, and less on the gags revolving around intercourse. The latter caused „Greetings“ to become the first X rated film in movie history. Many fans of De Palma's later, more sophisticated style may not be to pleased with "Greetings", while others will enjoy it precisely because it's so spontaneous and enthusiastic.