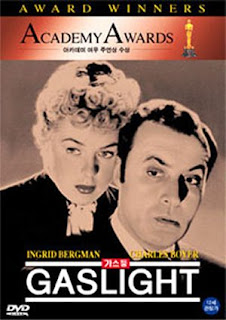 London. Young Paula left her house after she found her aunt killed and went to some Italian town to study singing. But that's interrupted when she meets the pianist Gregory who persuades her to marry him and move back to her house in London. But quickly Gregory turns out to be a tyrant and forbids Paula to leave out of the house, even convincing her she is mad. The awful situation is noticed by police officer Cameron who reveals and de-masks Gregory as a murderer who planned to steal the jewels from Paula's dead aunt.

Although it isn't especially famous, psychological thriller-drama "Gaslight", the second version of Patrick Hamilton's play with the same title, is a small masterpiece that gained considerable attention of the critics back in 1944 and even brought Ingrid Bergman an Oscar and a Golden Globe as best actress. Unlike many old black-and-white films who are famous but dated and stiff by today's standards, "Gaslight" even today seems fascinating and shocking because it convincingly shows a harassment of a woman, Paula (the weak), from a perfidious husband, Gregory (the strong). Especially intriguing is the fact that Gregory's methods of aggression are very subtle (he hides things from Paula and then claims she lost them since she is becoming mad; he doesn't let her leave the house) by which George Cukor's direction advances to a top form and even seems like a Hitchcock thriller, presenting Gregory as a type of man who does the most dishonest things and at the same time behaves as if he does the most honest ones, which gives the story an universal context about a two-faced tyrant.