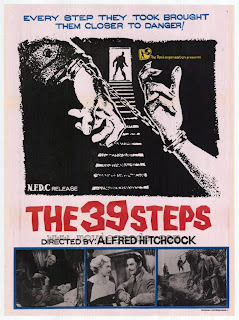 London. Canadian citizen Richard Hannay attends an amusing show in which entertainer "Mr. Memory" displays his encyclopedian knowledge, when suddenly a shot from a gun is heard and the audience runs away in panic. Richard meets Annabelle and gives her shelter in his apartment, where she admits him that she is a spy and that she discovered the secret called "The 39 Steps". The next morning, Richard finds her killed and in his getaway from the police he goes to Scotland. There he discovers that the secret of "39 Steps" are kept by the evil spy Jordan who wants to eliminate him. Still, with the help of attractive Pamela, with whom he was handcuffed, he finds out that "Mr. Memory" knows the secret of "39 Steps": a design for a soundless aircraft. He gets shot but still tells them the information.

The breakthrough film in Alfred Hitchcock's career, after he already made 19 films, "The 39 Steps" are not one of his best or most virtuoso made achievements, but are still an elegant, amusing and intriguing thriller without too much suspense - actually, by today's standards, the movie is almost suitable even for little kids. Although the chopped up story doesn't have too much sense or logic, and has too many loose elements that don't come together, the film as a whole works surprisingly well thanks to humorous situations - for instance, the protagonist Richard manages to escape from his apartment that's constantly observed by evil agents thanks to the fact that he dressed into the uniform of a milkman whom he told he is "hiding from a jealous husband" with whose wife he just had an affair or when he is forced to run and hide in a hotel together with the arrogant Pamela who was handcuffed to him by false police officers - the intriguing concept of two different protagonists bound together was later copied in a lot of films, like in "The Defiant One". Not to mention the hilarious moment where Richard stumbles into a ceremony and gets confused for a politician, going on to hold an improvised speech - when he bends down to read what his actual name is supposed to be, he just barely recognizes some name placed backwards starting with a "Cr" and calls himself with the nickname "Crocodile". Equipped with Hitchcock's exciting and classic concept of an innocent man accused for a crime he didn't commit, "39 Steps" are a very good film.