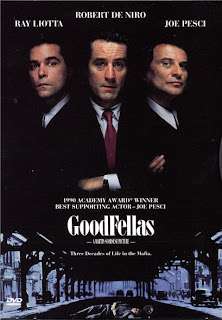 New York from '55 to '80: Henry Hill was fascinated by mafia gangsters as a boy and decided to join them. He smuggled cigarettes, but didn't snitch anyone when he was caught by the police, which made him popular in the mobster circles. His partners are violent Jimmy and small Tommy, who is even afraid to tell his mother what he does. The two of them sometimes kill their enemies like animals. Henry falls in love with Karen and the two of them get married. He gets two daughters and spends a few years in prison. When Tommy gets killed, Jimmy starts suspecting Henry might have snitched someone. In fear for his life, Henry decides to become an FBI informant. He testifies on court against the mafia and gets displaced somewhere under the witness protection programme.

When in 1990 "Dances With Wolves" triumphed at the Academy Awards by winning 7 Oscars while crime drama "Goodfellas" picked only one statue (Joe Pesci as best supporting actor) out of 6 nominations and 5 "empty" Golden Globe nominations, many complained that the academy made a terrible mistake and failed to recognize Martin Scorsese's precise talent. The BAFTAs even awarded "Goodfellas" as the best film. Still, regardless of everything, that just proves that honest human emotions, the ones found in "Wolves", were always more genuine and superior than precise, but mechanical and cold stories that offer "Goodfellas". Namely, that mafia biopic of real ex-mobster Henry Hill and Scorsese's most famous film is excellent, but still a little bit overrated. Naming it even as one of the best movies of all times is an exaggeration since there are superior gangster films present, like Coen's "Miller's Crossing" or Wellman's "The Public Enemy".

It is at moments a virtuoso directed story about gangsters with a "God complex", many details in the dark story are brilliant (mobsters turn with their car to the Zoo and threaten to throw a man in debt to the lions if he doesn't pay up; thanks to strong connection they can afford luxury even in jail; after a robbery, Jimmy suggests to everyone not to spend their money until the case has "settled down"...) as well as amazing Steadicam shots (the long, 3-minute entrance of Henry and his date into a restaurant, shot in one take, is a remarkable trick that also underlines how time "stopped" for him by abandoning the previous style of fast cuts of the movie), and the insight into the world of organized crime avoided to turn glamorous, since it shows that with time even Henry himself didn't know whom he can trust anymore: the message is poignant - if you work for evil, don't be surprised if it turns evil towards you, too. This sent subtle morals without turning preachy. Even the ending where Henry is hiding somewhere in the US in a small city leaves an impressive effect, but it seems Scorsese filled the whole film with always the same, repetitive variations of the murders of the mobsters, which somewhat exhausts the story near the end, that seems emotionally and spiritually empty: it only shows brute characters on the "lower" level of consciousness, not on the higher one.