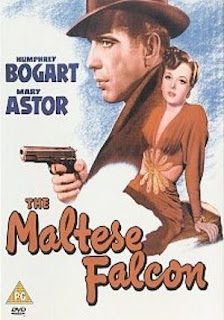 Sam Spade is a private detective in San Francisco. One day, a certain Mrs. O'Shaugnessy enters his office and gives him the assignment to spy on some Thursby who allegedly kidnapped her daughter. Sam sends his associate Miles on the case, but he and Thursby are soon discovered dead. Since the police suspects him, Sam goes on to search for Mrs. O'Shaugnessy and discovers that she doesn't have a sister and that Thursby was her lover. Some Joel Cairo enters Sam's office the next day and tells him he is in search for the Maltese falcon, a valuable golden statue, and that his boss Kasper is looking for the same thing. Mrs. O'Shaugnessy discovers the statue, but Cairo and Kasper discover it's a fake and leave. Sam sends her to jail because she killed Miles.

"The Maltese Falcon" is one of those films that are so acclaimed that critics don't even want to dare to complain about anything, but get set already in advance to praise it before they see it. But "Falcon", John Huston's first film and for some the first film noir in general, is a truly fine classic that hit the nerve of the cinema and became a model for later film noirs. It's an old fashioned film that impresses with a clear author's calligraphy, calm mood and class, but it has a slightly too complicated, inextricable story that constantly leads on the false trail and resolves the mystery only towards the end. The figure of private detective Sam Spade, brilliantly embodied by Humphrey Bogart, quickly became an icon and is truly amusing when coping with problematic situations. For instance, when a police officer accuses him of murder of Thursby, Sam replies with: "Really? Please, remind me, how did I kill him...?" There are many other juicy lines and dialogues that make Sam such an unpredictable and witty character ("You'll get slapped and like it!"; "Stop me when you can!"), and thus it comes as no surprise that it easily helped catapult Bogart into stardom. If there would be one complaint, except for the tame tone that might bother a part of modern audience, then it would be the incoherent ending with the false Maltese falcon, but not the brave decision for a tragic (love) ending and that legendary line: "The stuff that dreams are made of".