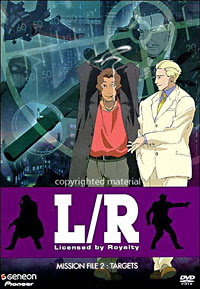 Jack Hofner and Rowe Rikenbacker are two agents of 'Cloud 7', an organization working for the Royal family of a fictional kingdom of Ishtar. Together with their associate Clarie, they solve numerous cases: they regain famous Royal artifacts held by Dr. Floyd, rescue a double agent kidnapped by gangster Schwartz in his castle, fight to preserve to status of a satellite, save a diabetic stuck in a cable car...but one case turns their lives upside down: they escort the 14-year old Noelle, a candidate for the lost Princess of Ishtar, to Ivory island, and she turns out to really be the Princess. The media let the world believe her father was killed because wanted to topple the Royal family, but in reality he just discovered that the family and DTI, a notorious exploitative corporation that devastated Ivory, worked together in a secret agreement. Taylor, president of the DTI, orders Noelle assassinated during her speech, but Rowe and Jack trick him by creating a fake assassination and arrest him.

Unknown "Licensed by Royalty" definitely isn't one of the best contributions to the anime genre, but it's a fairly well made, decent, sometimes solid sometimes very good achievement equipped with great, albeit a little stiff animation. At first, it seems like an average action flick series handling the cliche theme of two agents, Rowe and Jack, resolving missions for some Royal family in a fictional kingdom called Ishtar, but during the course of it's 13 episodes the story slowly crystallizes a different plot and dares for something different, showing the corruption of the Royals and a mega corporation, placing the heroes in an unenvious situation where they have to decide if they should stay loyal to their evil bosses or the good citizens. But by presenting such an interesting main plot, the authors got lost in the beginning where they had too many filler episode revolving around trivial, throw away adventures of the two agents, and generally the story lacks charm, spark and that special anime touch: the characters don't come across as very interesting or fascinating and only in small little instances deliver some great little moment, like the humorous scene where a bunch of paparazzos are waiting in front of the mansion to take pictures of the princess candidate Noelle so Claire simply "takes care" of them by pressing a button that makes two statues of nude men 'urinating' waterfalls turn around and sprinkle them or the enchanting scene where one transvestite Mark, calling himself Marguerite, meets Rowe on the street and almost starts flirting with him by using sweet words, all the while the camera just zooms to a close up shot of a jealous Claire who's facial expression gets more and more annoyed by the minute. In their intend to turn this anime hip and cool, it ended up only quarter-hip and quarter-cool, due to a story that lacks deeper examination of the interesting subject, an underused key character of Noelle and a solid, but too mild finale, yet it's still interesting, even though this is one instance where an anime is just as popular as it deserves to be.