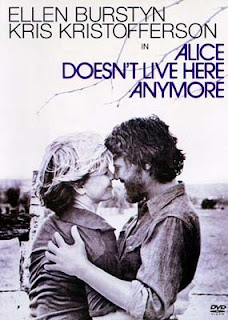 As a young girl, Alice dreamed of becoming a singer in the small town Monterey. 27 years later, Alice married the violent bully Don and got a problematic little son Tommy. When Don dies in a car accident, Alice decides to move with Tommy to Arizona and becomes a singer. But when her new boyfriend Ben also turns out to be abusive, she runs away with Tommy into a new town. There she finds a job as a waitress and finds a new boyfriend, David, who is much kinder. Even though she leaves him after he got into a hge argument with Tommy, she returns back to him and starts a relationship.

"Alice Doesn't Live Here Anymore", the 4th feature length film directed by Martin Scorsese, is a gentle and touching drama in the format of a road movie in which the famous director proved his talent even outside the gangster genre. Ellen Burstyn is excellent as the title heroine, a strong an independent woman with flaws, for which she deservedly won several awards. Unlike many of his dark, nervous and paranoid films, this Scorsese flick is refreshingly positive and colorful, even though it has many bitter elements. The young director was back then incredibly fresh, full of energy and power, and enriched "Alice" with a fascinating visual style; the surreal opening sequence of Alice's childhood is shaped in a 30 % smaller frame than the rest of the film, while unusual camera angles are richly used. At the same time, the story is messy, murky, the dramaturgy incomplete, but the whole nature of the feminine film is so filled with energy it truly seems authentic - for instance, when the 8-year old Tommy opens the door, spots his cheerful mother Alice in a strange green dress and immediately shuts them again or when David slaps him. In the essence, it's a story about self actualization that once again mirrors Scorsese's pessimistic view on life full of chaos.