Simon of the Desert 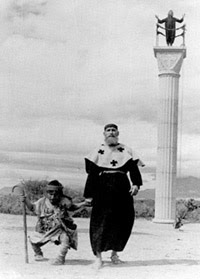 5th Century. Simeon Stylites, a Christian saint, has been living on the top of a pillar in the middle of a desert for 6 years in order to redeem humanity and gain God's wisdom with asceticism. A bunch of his followers present him with a new pillar, twice as tall than the previous one, and he accepts to swap places. People bring him food and water while he prays and even does miracles, like when he heals a man's two cut hands. He is tempered by the devil disguised as a blond girl and a priest. In order to fast even better, Simeon even decides to stand on one foot. But the girl brings him on a journey in an airplane directly into a big city, where he is bedazzled by a disco club full of teenagers.

Surreal champion director Luis Bunuel took the legend about the Christian saint Simeon Stylites who stood 37 years on the top of a pillar literally, filmed it in his unusual satire "Simon of the Desert" and used it as polygon to question the sense of any kind of ascetic extravaganzas and self-torture used to redeem humanity by God and to criticize the institution of organized religion. Since Bunuel didn't have enough funding, "Simeon" stayed only a 45-minute long short film that didn't live up to it's full expectations - the exposition, although containing a neat satirical gag where priests try to "indulge" Simeon by presenting him a new pillar, twice as tall then the one his is standing on top of, seems slightly forced, shaky, uneventful and unfunny, not exactly justifying why Bunuel chose to film exactly Simeon or what he wanted to say. Still, with time the story quickly picks up and becomes truly virtuoso directed at moments, especially in some aesthetic images like the one where a cloud sweeps by the pillar on which Simeon is standing or a view of him from the frog's perspective, equipped with dazzling sky in the background. Not to mention that the sly story is filled with great little black humored ideas: Simeon blesses an insect in his hand; the devil leaves defeated in the shape of a naked 70-year old lady (!) or appears as a young woman with a beard holding a sheep; Simeon advises a young lad he can't become a priest until he grows a beard; the airplane and transportation into a modern disco sequence near the end...all sharp and clever ideas that seem intelligent and create a Fellinieqsue atmosphere, creating an interesting film where one can only wonder how it could have looked like if it was a real feature length flick like Bunuel originally intended.