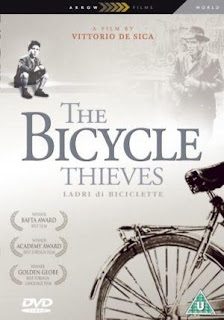 Italy after World War II. People are torn by poverty and high unemployment, but the poor Antonio actually manages to find a job gluing posters, but for in order to keep it he must have a bicycle. In order to buy him a bicycle, his wife Maria sells the sheets from their bed. The next day Antonio starts his job but already in the morning some guy steals his bicycle. In panic due to the awful situation, Antonio reports the theft to the police, but nobody is really interested in solving the case so he goes to search for the bicycle with his little son Bruno himself. When they finally find the thief, they can't do anything because he is protected by his neighbors. In the end, Antonio steals a bicycle himself, but gets stopped by the people.

Winner of several awards, "The Bicycle Thieves" is a representative example of Italian neorealism, a film movement where the authors portrayed the everyday life and problems of the small man, using real life people instead of actors, in this case Lamberto Maggiorani, a factory worker, as the main actor. "Thieves" are a gentle and deeply emotional classic that hasn't aged at all and that seems as if it was directed by the young Fellini since it shows a tragic story in an uplifting, poetic way. Despite a slightly heavy narration, the simple story about the unemployed Antonio who can't keep his job because someone stole his bicycle, contains a skillful iconography rich with fine details that capture the state of post war Italy with an almost documentary feel (hundreds of people in a queue are waiting for a bus at the station; Maria sells her sheets to buy her husband a bicycle; little Bruno is "stretching" the warm cheese in his meal), the natural mise-en-scene seems effortless, the positive humanity radiates with spirituality while the open ending, where a desperate Antonio becomes a thief himself, clearly suggests how a distraught society just creates the foundation for criminals which it prosecutes.