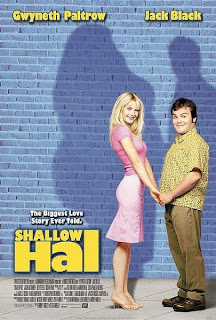 Hal and his friend Mauricio go almost every evening to disco bars to "hunt" for attractive women. Hal isn't particularly dashing at all, but he is still extremely critical in picking only physically beautiful women. One day, he gets stuck in an elevator with guru Tony Robbins who changes his perception by hypnotizing him to only see the inner beauty and soul of women, not their external looks. Hal thus falls in love with the overweight Rosemary thinking she is actually a thin blond. Mauricio unhypnotizes Hal who doesn't recognize Rosemary who breaks up with him. But he still falls in love with her again and she into him.

With all due respect to their comedies "Kingpin", "Osmosis Jones" and "There's Something About Mary", but "Shallow Hal" is simply superior and is thus til date the best Farrelly brothers film. Deprived from any kind of vulgarity or political incorrectness, that gentle romantic tragicomedy, their first "calm" film, wasn't especially recognized by the critics who, equally superficial as the protagonist Hal, looked at the external appearance of the story and complained due to the sign of equality between external looks and inner beauty, missing the magic of the story about love that transcends all obstacles. Who would have ever thought that in a Hollywood film you can hear such lines like the one where Tony Robbins says to Mauricio that his concept of beautiful women is just a programmed form imposed from TV, movies and magazines, and that there is so much more? Or the one where Rosemary says that she knows that she will never be beautiful, but that she accepted that? There are some funny moments present - like when Hal spots the once dashing Fat Li'iBoy in his real appearance - but in its core this personal film is actually more emotional and touching than comical while Jack Black and Gwyneth Paltrow are in great shape. The Farrelly brothers, guys who make losers out of heroes and heroes out of losers, are truly little heroes themselves.