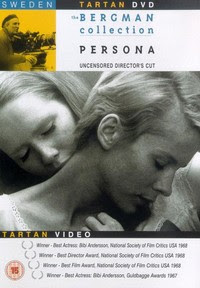 The lights turn on, a film reel starts turning, a camera starts projecting on the screen in a cinema. A blond boy touches a giant face painted on the wall. Actress Elisabeth becomes mute in the middle of the play "Electra". From that day on she never speaks a word but the doctors can't determine any kind of psychological or physiological sickness. Alma, a nurse, brings Elisabeth to an isolated, quiet house near the sea, hoping she will recover. Since she is always silent, Alma speaks more and more instead of her, even mentioning an affair with an unknown guy and aborting the baby. Alma later finds Elisabeth's letter: there Elisabeth writes how she is studying her and thinks she is mad. Alma confronts her and has a fight with her, leaving in a bus.

This brilliant film has such a surreal exposition that the viewers at first don't know what they are looking at: two light bulbs turn on, a movie reel starts turning, a camera is projecting a scene of an animated film backwards, a spider walks over a white surface, a man is removing the womb of a sheep, a boy is touching a giant picture of a woman on the wall. After that authentic, psychedelic opening shots the real story starts in which the main heroine, actress Elisabeth, all of a sudden becomes mute and thus never speaks (incidentally, Liv Ullmann, the actress playing her, didn't have to learn almost any kind of dialogue) while her nurse Alma (amazing Bibi Andersson, nominated for a BAFTA) on the other hand constantly speaks all the more instead and begs her to say something. Their relationship is full of symbols, or how Ingmar Bergman said "undefinable secrets of life" (for instance, religious symbols: a religious person is constantly praying God for an answer, or psychological: Alma and Elisabeth are one and the same person, or medical: the transference of the patient and the doctor), full of hypnotic, unusual, huge closeups of faces and experimental style. Although it's not exactly clear what the silence represents, there is no doubt that "Persona" is a shining drama, full of scenes that infiltrate in the viewers memory (the scene where Alma looks through the window while the movie reel suddenly literally bursts), one of the best, if not the best achievement Bergman ever made.