The Lord of the Rings: The Two Towers 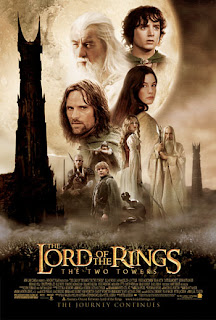 Frodo and Sam are still on their way to Mordo to destroy the ring, when they meet it's former owner, the bizarre creature Gollum. Gollum agrees to show them the way to Mordo, while they are still persecuted by Sauron's henchmen. Meanwhile, Legolas, Aragorn and Gimil are running away from the army of Orcs that is also prosecuting them from great distance. Hobbits Merry an Pippin manage to escape and hide in the magical forest, while the trio lands in Isengard, where the king, Theoden, is slowly getting under Sauron's influence. But Gandalf, who resurrected from the dead, manages to free the king from the spell and pursue him to defend his country from Sauron's army. Te fortress Helm's Deep gets under heavy siege, but the people manage to prevail.

Even the second part of the legendary "Lord of the Rings" movie trilogy, nominated for 2 Golden Globes, winner of 2 Oscars and 2 BAFTAs, contains the same impressive director's calligraphy established in the ambitious original, but not it's equal tight atmosphere and energy. The tight atmosphere has been abandoned, but the energy of "The Two Towers" is actually even more powerful. The film has a suspenseful plot, but it's main problem are it's stiff characters, one dimensional sketches that nobody really cares for except for when they are fighting in huge battles. Also, many fantasy creatures contain a large dose of trash. Among them are elephants with 4 tusks, giant hyenas ridden by Orcs and the rather silly, bizarre talking trees. Nazgul on the other hand looks very impressive. If anything, the final sequence of the siege of the fortress by the army of Orcs, in simply stunning and has to be seen. Among the brilliant situations where Jackson displays his hidden sense for military strategy and passionate stylish action, a bomb of a sort is placed under the tunnel of the fortress and a "kamikaze" Orc is running with a torch to ignite it. Aragorn spots him and orders his shooters to forget the army and concentrate their arrows to stop him. They manage to shoot him with two arrows, but the Orc still manages to run into the tunnel, causing a giant explosion that demolishes a large part of the fortress, while stones from the sky keep even falling on the army of Orcs. Once again, an ambitious 3-hour long epic with a religious subtext (a resurrected Gandalf acts almost like an angel), but there is still a feeling that a lot more could have been made out of the book, especially from the boring, trivial dialogues that even seem to bother, thus as a whole the movie doesn't quite manage to reach the essence of Milius' similar "Conan".