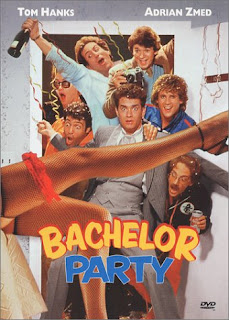 The crazy Rick Gassko is a driver of the school bus who is always getting into trouble with the school's nuns who are complaining because he is always late. But Rick is also happy because he is going to get married to Debbie, the daughter of a wealthy family that can't stand him, so his friends organize one last bachelor party for him. Together with five friends, Rick enters a hotel, but his friends ruins a prostitute delivery. Debbie secretly dresses as a prostitute and enters into the hotel, catching Rick, but also forgiving him. As the police siege the building, Rick's rival kidnaps Debbie. Still, Rick saves her and they get married.

"Bachelor Party", the comedy where Tom Hanks made his movie establishment after his career as a TV actor, is an sufficient, easily watchable and sometimes funny rude-vulgar comedy although having an incredibly bad reputation. Shameless, cheap, "sinful" and adult, the story is weak but the director Neil IsraeI still managed to pull out some sort of acceptable rhythm and humor, while the pale characters sometimes manage to shine, except for the humiliating role of the rival who is being humiliated by everyone. Among the better parts of the film is the exposition where the hero Rick is once again late with his bus, exiting and saying to the nuns: "I have a sensational excuse for being late!" - "We are not interested!" - "Then I shouldn't have stopped to help that little boy!" and the ending where he is simultaneously fighting with his rival in the exactly same way as the actors on the big screen in the cinema in the background. Still, around the middle, the film is helplessly lost and without charm, with infamous gags (a man's penis placed as a hot dog in a bun on a plate), no understanding in portraying prostitutes and slipping into primitive screaming and savaging, which can get irritating.