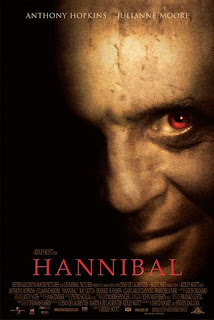 Hannibal Lecter is still on the loose but also persecuted by Mason Verger, a rich man who was left mutilated and paralyzed as one of his victims. Meanwile, FBI agent Clarice Starling watches as her career is slipping down the drain after a failed stakeout where she shot Evelda, a drug dealer, while she was holding a baby. Hannibal is sending her letters from which the police figures he is hiding on Italian territory. There a policeman tries to capture him alone, but he is brutally killed. Hanibal then goes back to the USA, while Verger and agent Paul deliver falsified love letters from Hannibal to the head of FBI, apparently found in Clarice's office. She gets suspended. Verger manages to catch Hannibal, but just as he is about to be fed to a herd of wild hogs, Clarice is able to save him. Verger gets killed by the hogs himself, while Hannibal eats Paul's brain. Clarice is let free.

One decade after the critically acclaimed thriller "The Silence of the Lambs" (and 15 years after it's prequel "Manhunter"), a commercial sequel was filmed, "Hannibal", but a one that has almost no inspiration. Instead of having a subtle style, like Mann's excellent "Manhunter", the only thing this film contains is dumbing violence in frenzy orchestration of the once talented Ridley Scott, while Jodie Foster was wise enough to reject having a part in this disaster after reading the screenplay which showed madness of everyone involved. The whole story is an inconsistent mambo jumbo thriller, featuring such gruesome scenes as the mutilated face of Mason Verger (Gary Oldman) who was drugged by Hannibal Lecter and forced to cut his own skin with glass, and who ends up eaten alive by a horde of wild hogs. In another scene, Lecter kills a cop by hanging him and slicing his intestine open, while he separates the upper part of Paul's skull and eats his brain. Such splatter violence would probably appeal to some distorted dictators and psychopaths, but a large number of demanding audience will gladly forget this psycho garbage. Also, it's rather unconvincing that Anthony Hopkins, then a 65-year old, would turn out to be such an invincible and powerful opponent. True, there is something slightly romantic in Lecter's caring relationship with Clarice, and he could symbolically pass as a dark version of an avenging angel or as an allegory of the masses obsession with violence, the cinematography is nice, but all of that is simply not important when everything is gone downhill like here. In the end, it's simply a bad film.