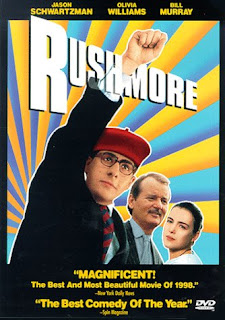 Max Fischer is an intelligent, but problematic 15-year old kid who spent all his energy into extracurricular activities at his "Rushmore" school; he is president of Yankee Review newspaper, French club, Rushmore beekeepers, Lacrosse team, fencing team, astronomy team, calligraphy group, drama club...Yet, despite being very gifted, his grades are very weak. One day he falls in love with the older Rosemary Cross, a teacher from another class, and tries to impress her by making an aquarium for the school. He also makes friends with the middle aged Blume, a local millionaire and a former "Rushmore" student. But once Blume and Mrs Cross start an affair, Max gets very angry at him and disables his car brakes, after which he gets arrested. By changing school and staying with his father, Max starts to see things in different light. He renews his friendship with Blume, who has been left by Mrs Cross. At the end, Max writes a play about Vietnam war and invites all of his friends to see it, later organizing a party and starting a relationship with a girl his age, Margaret Yang.


This coming of age film is definitely not for everyone's taste because it contains a hermetic style, but it is so rich with small details that the viewer has to pay twice as more attention than usual in order not to miss something. The main protagonist is a rather unusual teenager; Max, who can react pretty harsh, yet is still a very intelligent person. The over a minute long marathon montage near the beginning of the film, which literally shows a hundred of his extracurricular activities using subtitles - Yankee review publisher, Lacrosse manager, astronomy club, fencing club, French club, stamp and coin collection club, beekeepers club, debate club... - is absolutely virtuoso crafted and looks as if it was directed by Godard. But except for being inventive, director Wes Anderson is also amazing in small touches that are easily forgotten, but say a lot about the characters and their feelings.

For instance, in one scene Max shows his weak math test result to his father; he only scored 37 points. But what does the father do? Instead of shouting or getting angry, he shows unprecedented understanding and care by taking a pencil and "turning" the 37 points into 87, amusingly adding; "You almost got an A". Such small interactions are real jewels in the film and can not be found everywhere, not even in other Anderson's films. A hidden theme in the story is how Max tries to be "too grown up" and thus aims for a teacher who is too old for him, until he realizes that he should not rush but live his life one step at a time, figuring that he entirely ignored a girl his own age who had a crush on him, Margaret Yang, played irresistibly cute by Sara Tanaka. The fine shot composition is also surprising. The flaws in "Rushmore" mostly turn out in the last third of the story; Max turns out to be too aggressive at one point and the mood too depressive and black compared to the start, and some scenes seem to drag. Still, the ending, the enchanting songs ("Here Comes My Baby" by Cat Stevens) and Bill Murray's understated and unorthodox performance (he was rightfully nominated for a Golden Globe and actually won the New York Film Critics Circle Award) regain the films quality. Although it's very eccentric and contains samples of 'autistic direction', humorous independent drama "Rushmore" is an excellent achievement.

I got this for Christmas via the Criterion Blu-Ray. A very guininely funny movie. It's made me curious in checking out the rest of Wes Anderson's filmography.

A cult classic, sadly forgotten. The only thing I don't like about it are the last 15 minutes which somehow seem rushed and without that inspiration from the start.