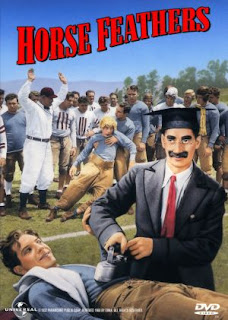 The Huxtley college is becoming increasingly unpopular. Thus professor Wagstaff has been elected as the new dean to improve the situation. His son Frank is already attending the college for 12 years and has an relationship with a beauty. Wagstaff decides to modernize the football game and hires a madman and his Italian friend as team players. A mobster wants to sabotage the game because he placed a bet on the rival college, but he doesn't succeed and Wagstaff wins.

The Marx brothers made together only 15 films, but they still managed to get into movie history. In their anarchic humor, there's a hidden theater of the absurd, the critique of serious people and the silliness of life, which even caused some critics to compare them with the Dada writer Samuel Beckett. In their 4th film, "Horse Feathers", they chose the college as their target, but it seems it's somehow never a good terrain for comedians. It wasn't for Laurel & Hardy either in their weak comedy "A Chump at Oxford". "Feathers" has too much arbitrarily nonsense and too little genius jokes with a punchline. Still, it has it's funny moments: the professors chose Wagstaff as their new dean, who is just then shown shaving. He arrives and immediately starts an argument with a professor ("Now that you stepped into my shoes..." - "So that's what I stepped in! I was already beginning to wonder...You should clean them up once in a while."). In another great comic moment, the mobster lover returns into the apartment of his girlfriend and spots Chico there, who immediately thinks of an excuse and says: "Your wife is learning how to sing." - "Since when?" - "Since you came in!" And there's the ontological joke where Groucho tries to make Chico sign a contract ("Sign here!" - "But the paper is empty!" - "You sign it, and I'll type the words later!"), but the tiresome musical sequences are a small minus.