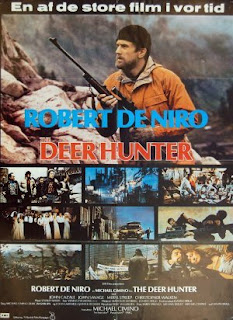 Pennsylvania. Friends Mike, Nick and Steven are Russian-American steel worker. They are cheerful drunks who often go deer hunting with Stosh and Axel. Mick and Nick are in love with Linda, but don't talk about it. Steve marries Angela, despite the objections of his mother who thinks she is ugly, and everyone celebrates on the wedding...Vietnam War. Mick, Steven and Nick become war prisoners of the Viet Cong who force them to play Russian roulette with a pistol with one bullet. But Mike manages to kill the soldiers and escape together with Nick and Steven in the jungle...Pennsylvania. Mike returns home as a changed person and starts a relationship with Linda. Steven lost his legs. Mike returns to Vietnam to get Nick who plays roulette and kills himself.

3 years after the end of the Vietnam War, Hollywood started contributing its share of views on the subject and many of them were obviously not an easy piece of cake. One of them, "The Deer Hunter" is a controversial, black and shocking war film without any compromise that works on many levels, from the change and maturing of characters up to an antiwar film, yet during it's premiere many critics bashed it for it's vicious tone. The 3 hours of running time are divided into 3 segments: in the first, Mike (Robert De Niro) is described as a nonchalant happy man: he looks at the Sun behind the clouds and claims it's a sign to hunt, so one of his friends tells him: "Mike, sometimes I think only a doctor can understand you!" Mike also advises everyone to carry only 1 bullet during the hunt because it's fair towards the deer. Director Michael Cimino elegantly leads that part of the story and copes well with the characters, especially in the almost an hour long (!) wedding sequence. Then follows a smashing cut to the middle of the Vietnam War, where the Viet Cong forces the protagonists to play the deadly Russian roulette with only - 1 bullet. After Mike underwent all that horror and returns to his peaceful home, it seems as if he found his more gentle, introverted side. The War was awful, but it taught him to avoid the killing and the guns. Among all the actors, Christopher Walken shines in the small role of Nick who succumbs to all the madness and loses his sanity. The movie won several awards for such a gritty portrait.