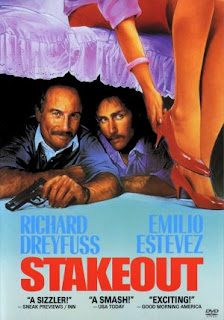 Criminal Richard Montgomery escapes from prison with the help of his friend who drives a truck. The police suspects the fugitive could visit his girlfriend Maria, so the clumsy detectives Chris and Bill and sent to surveil her house from a house in the neighborhood. They have the night shift and are replaced by day by colleagues. But eventually Chris falls in love with Maria - and goes into her house to meet her. That way he confuses the police chief even further, while the younger Bill doesn't want to put his career on stake. When Richard finally arrives, he is caught in a long chase, while Maria forgives Chris for not telling her he is actually a cop.

"Stakeout" is different kind of crime film that combines thriller, comedy and romance in an unusual mix that rightfully ceased attention from the critics and the audience. That the combination is often clumsy can be seen already in the exposition in which the getaway from the prison is shown in a too messy and violent way, while the final chase is also quite ordinary and bleak. The romance between Maria (Stowe) and Chris (Dreyfuss), the cop who is secretly surveilling her house at night from the neighboring house, is the best part of the story creating a lot of funny problems and double relationships between them, even though he just brags to his colleague Bill that he is just "surveilling the house from inside". That unusual relationship, where the secret observer wants to interact with the observed person but keeps his disguise on, is almost esoteric at moments and works as a comical and more active variation of Hitchcock's film "The Rear Window". The sole concept of surveillance wasn't especially cleverly exploited in the film, but it offers an atmospheric mood while the director John Badham is in better shape and avoids cliches.