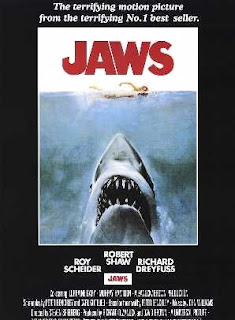 Amity Island is a popular tourist resort during summer. One night a girl swims in the sea and mysteriously disappears. When her body is found on the beach the police chief Marty Brody concludes that it was a shark attack and decides to close the beach. But he is stopped by the mayor who insists that the tourists stay. When a little boy also gets killed by a giant shark, Matt, an expert for oceanography, shows up in town and criticizes the mayor. After another victim, Marty, Matt and the shark hunter Quint sail off with their ship to hunt for the giant shark. In the middle of the sea the shark sinks their ship and eats Quint, but Marty manages to kill it with an air tank he shot.

Steven Spielberg did not enjoy filming "Jaws", but it was precisely that film that brought him fame since the audience massively rushed to cinemas optative to sense hysteria in the story about a giant, 25 ft long shark: in the end, "Jaws" sold over 128,000,000 tickets at the American box office, which placed it as the 7th highest grossing movie of the 20th century and the 2nd highest grossing movie of the 70s, just after "Star Wars". The legendary musical score by John Williams and director Spielberg created a subtle iconography of fear, anxiety and hydrophobia: scenes of the corpse of the girl on the beach full of crabs, a book about the attacks of sharks, "false alarms" about the sightings of the fish near the beach and video games about the shark are slowly, but surely and masterfully grading the mood of elevated suspense, but unlike other horror directors, he cares for his characters and even inserts emotions in their situations. Still, the first half of the story is slightly inert and long, especially when the mayor is urging dozens and dozens of tourists to go swim in the sea, which seems like an exaggerated critique of profit under every cost. The second half of this shining film, which lasts for an hour, is much more interesting and brilliantly elevates the suspense all until the climax, reminiscent of a modern "Moby Dick" tale: in it the trio is on a ship in the middle of the sea hunting for the giant shark, which offered a great mood of isolation and comradeship. There are even some metafilm touches, such as the one where the fisher is called Quint (Latin for five) since he is actually the fifth victim of the shark, whereas in the finale the shark even jumps on the ship and tips it vertically, offering a wonderful suspense rush. "Jaws" is a rare example of a horror that does not only have suspense, but also sophistication: despite a limited budget, Spielberg showed a lot of ingenuity in order to find ways for it to work, and its scenes are directed with such passion that they grip with ease even today.