The Valley of Gwangi 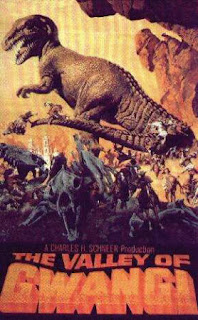 Mexico, 19th Century. Cowboy Kirby returns to a small city to his girlfriend T. J. who works in a rodeo as an entertainer. T. J. is still mad at him for leaving her, but she shows him her newest attraction: a small prehistoric horse. Kirby shows the animal to a professor who arranges a few gypsies to steal it and let it loose, in order to return to the mysterious place where it came from, hoping to find some more. By following the horse, the cowboys enter into a cave and come to a lost valley full of Dinosaurs. They manage to capture an Allosaurus and bring it back to town, placing him in an arena. The Allosaurus escapes from his cage They are forced to kill it.

Like most films whose effects were done by the legendary Ray Harryhausen, the bizarre western fantasy "The Valley of Gwangi" is also considered an achievement of low value that exploited the iconography of trash too excessively. The actors are not bad, not even Gila Golan, the former Miss Israel, but when Harryhausen uses his classic Stop motion technique to create Dinosaurs, the puppets of the monsters suddenly become alive while the live characters become puppets, whose dramatic problems and conflicts simply seem boring. The action sequences are the only oasis of charm (the cowboys are capturing Dinosaurs with lassos, the Allosaurus starts fighting with an elephant in the arena), but sadly the only action all of the characters know is only to kill practically every prehistoric creature they meet, and the finale gains almost occult proportions (Gwangi, the Allosaurus, dies in flames in the church) while many situations and actions from the characters seem moronic (for instance, towards the end, a guy releases Gwangi from the cage by firstly releasing the lock on the lower part, and then climbing on the upper end of the cage). "Gwangi" is definitely not superior to Spielberg's "Jurassic Park" like some nostalgic fans like to claim, but just a sufficient film.