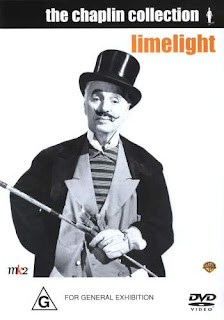 London, 1 9 1 0s. Calvero is an old entertainer whose glory days have long gone. He drinks in pubs unable to reconcile with the fact that he was once a famous clown, but one day he manages to save a girl, Terry, from committing suicide with gas and places her in his apartment. When she regains her consciousness she admits she didn't want to live anymore when she found out she has rheum, since her job is a dancer. He nurses her and she eventually becomes a successful dancer. She wants to marry him, but he thinks she only has pity with him. On his grand comeback show, Calvero falls in a drum and eventually dies from his injury, but the audience laughs because they think it was all part of the act.

Charlie Chaplin made an unusual move towards melodrama in his second, weaker part of his career, during the sound era: his movie "Limelight" is rather forced since it contains too many one dimensional events and elements (his protagonist Calvero is idealised heavily, being presented as a hero who rejects the love of an attractive girl, Terry, because he thinks she deserves someone better and younger) and shamelessly exploits his personal fears: Calvero disguises himself as a famous clown that looks remarkably like the legendary Tramp, mirroring Chaplin's own fears that his humor and his whole work might have become outdated and forgotten in modern times. Of course, the Tramp will never become outdated, thus Chaplin uses the story as a way to gain his self-esteem once again. Also, for the first time, Chaplin showed himself on film without a moustache and with gray hair, presenting his real, undisguised self. The first half of the film is actually truly good: when Calvero saves Terry from committing suicide and brings her to his apartment, the landlord asks him what he is doing, upon which he replies: "Exactly the opposite of what you think!" When Terry complains that life doesn't have a meaning, he gives her a wonderful, magical, underrated advice: "Why should life have a meaning? Life should just be lived!". The second half is pretentious, but still emotional and heavily autobiographical. In the finale, for a few minutes, Chaplin and Buster Keaton, two legends of old movies, appear together on stage doing a sketch, which is an ontology of classic comedy, despite not being funny enough and underdeveloped.