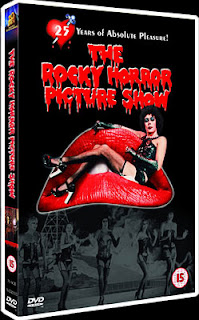 After they attend a wedding of their friends, young Brad Majors and Janet Weiss can't resist but not to get engaged themselves. Driving to visit Dr. Scott one rainy night, their car gets a flat tire so they are forced to walk to a nearby castle to ask for a phone call to contact help. They are quickly surprised by bizarre inhabitants in the catsle holding a party and meet transvestite Dr. Frank N. Furter who unveils them the secret of life and creates a blond man, Rocky, out of his laboratory. Eddie, ex-delivery boy, storms in with his motorcycle and gets killed by Frank. He then goes on to seduce both Janet and Brad. In the end, Riff Raff and Magneta kill Frank with a laser and release Janet, Brad and Dr. Scott, while the castle flies off into space.

To almost every musical, the most essential thing is the choice of songs and their quality in order for it to work, and "The Rocky Horror Picture Show" simply has a great supply of catchy songs, whether it is the opening "Science Fiction/Double Feature", the wonderfully hilarious "Dammit Janet", energetic "Touch-a, Touch-a, Touch-a Touch Me" or the evergreen "The Time Warp", all in order amazing displays of music that, as always, can't be described with words but just with loud volume that has to go directly into the viewer's ears. Already in the exposition, in which just a set of red lips in the black background are singing about various horror B-films up to the sequence where the nerdy Brad is walking with Janet through the graveyard, stopping in front of a giant heart sign and proposes her, does the "Picture Show" establish its incredibly wild, quirky, free and amusing tone, proving that it still deserves its cult reputation as today as in 1975, dwelling into bizarre costume and set-design to create an ecstatic mood filled with black humor, while Tim Curry is great as the main "bad guy" Frank N. Furter, a "transvestite from Transylvania". It seems not even dramatic actress Susan Sarandon seems to hesitate to show her comic side, and despite numerous flaws - the story is chopped up and doesn't have any sense, the characters are thin, the structure relays too much on musical energy - the film still works because it doesn't intend to be nothing but a very fun ride through some experimental territory whose genealogy and symbolism don't even need to be tracked down.