The Phantom of Liberty 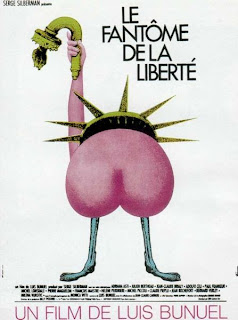 Several random stories from life. 19th Century: Napoleon's soldiers invade Spanish territory and kill rebels. One soldiers becomes hungry and eats hosts...20th Century: Family Foucauld is shocked by normal pictures of towns which were given to their daughter by some stranger. That night Mr. Foucauld dreams about an ostrich and a rooster...Some woman arrives at an unusual hotel. There priests are playing cards and a young man sleeps with an old lady...Professor of a police school tells his students how cultural norms are relative...A man is searching for his daughter at school even though she is right in front of his nose...A shooter kills passerbys. On the trial, he gets sentenced to death and simply leaves like a free man...A police chief discovers the corpse of his sister. A commotion breaks out in a zoo.

"The Phantom of Liberty" is an eccentric and often hilarious essay from surreal author Luis Bunuel about human civilisation and the relativity of social conventions, as it is said by a professor in the fourth story of the film. There is no main character in the film because the main hero is actually the absurdity of human laws, and several stories seem unconnected at all, but excellent rhythm full of demanding tone and inspiration keep up the positive impression of the film as a whole. As the title already hints, one of the major themes is also freedom (most of the protagonists in the film don't know what to do with it), but in some episodes there is simply no point at all because the author just wanted to notoriously ridicule a culture that seems illogical to him. "Phantom" is filled with crazy scenes: soldiers hunt foxes with tanks; priests smoke cigarettes; a hotel manager wears pants with a hole for his butt; a rooster walks around in the room; a statue hits a soldier. Especially satirical and expressive is the world where the behaviour considering going to a toilet and eating in kitchen are switched: some guests simply sit on the toilet bowl and talk as if that's normal, but when they get hungry they embarrassingly go to the kitchen to eat and lock the door ("occupied"). The film is brilliant even though it's not for everyones taste because Bunuel has a weird and original approach at surreal cinema.