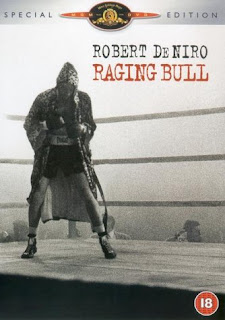 New York, '41. Jake LaMotta is a great boxer, but looses a match to Sugar Ray Robinson due to points, even though he was obviously stronger. Jake's manager is his brother Joey, who cares about him. But Jake is extremely aggressive to everyone, causing even his girlfriend to leave him. Still, he quickly meets the 15-year old blond Vicki and marries her. He is never knocked out and wins every match, but can never win the boxing champion title due to points. He becomes abusive towards Vicki and Joey and becomes overweight. After loosing once again to Robinson, he becomes a poor stand-up comedian in a club and his wife divorces him.

Out of all films directed by Martin Scorsese, "Raging Bull" is by far his most overrated one: on "AFI’s 100 Years...100 Movies - 10th Anniversary Edition" list, it ended on the 4th place (!), it is on IMDb's top 250 films list and for Roger Ebert it's even the best film of the 80s (!). "Bull" is a good film, granted, but such mystification, hype and idealisation are really puzzling since many critics just talk about its virtues, but rarely about its flaws. Truly, out of all the boxers in the world, it's not clear why Scorsese chose to make a biopic precisely about Jake LaMotta, an abusive, misogynist bad guy. Movies should be able to tackle every person, whether good or bad, but when presented with such an unsympathetic figure, it's hard to enjoy the film since it is hard to care about the characters at all. Robert De Niro delivered an interesting performance as the main anti-hero, but maybe it would have been better if he hadn't been playing a jerk, but a genuine character people care about.

Scorsese enriched the film with some brilliantly directed shots and heavy atmosphere, but annoyed with his constant trademark of forcefully imposed themes about male primitivism and aggressiveness. Even though the reputation of the film is that of an dynamic, suspenseful and electrifying boxing film, it is actually the complete opposite - a static drama about jealousy 95 % of the time, while the boxing sequences compose only some 5 % of its running time. To make it even more bizarre, even though authors said they prepared for boxing scenes for 6 weeks, the result on film is pretty average - they are hardly the "best boxing scenes of all time". The only exception is one towards the end, where Robinson is punching LaMotta in the ring, and he just says: "Hit me again! Hit me again!" After the match is over, the camera zooms in to one of the white ropes in the ring, revealing a dark stain of blood on one spot. Still, the movie is ambitious, extremely realistic, sometimes quirky (Vicki tries to seduce LaMotta before his match, but he refuses because he wants to stay fit, so he pours a glass of ice cold water into his underpants) and artistic due to its black and white cinematography (the only exception are small "home made" movies in color), and deserves to be seen.