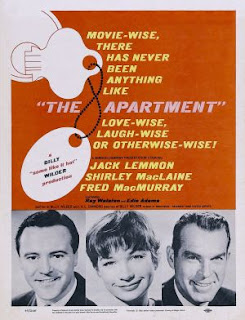 "On November 1st, 1959', the population of New York was 8.042.783. If you laid all these people end to end, figuring an average height of 5 feet 6 and a half inches, they would reach from Times Square to the outskirts of Karachi, Pakistan". Insurance clerk C. C. Baxter loves statistic data, but often feels just like a wheel in a machine. Still, he developed a good method for success in his career: he gives his bosses the keys of his apartment in order for them have a place where they can cheat their wives and have affairs, promoting him as a favor. Baxter loves the lift girl Fran, but is saddened when he finds out she sees his boss Sheldrake in his apartment. He even saves her from suicide. On New Year's eve, he quits his job and starts a relationship with her.

A masterpiece of classic, good old school film making, Billy Wilder's "The Apartment" combines drama with comedy and romance virtually flawlessly, gives both a subtle critique of Capitalistic deficiency and social relationships at the same time, is wonderfully simple, accessible and it even won 5 Oscars, 3 Golden Globes and 3 BAFTAs justifiably, even though looking at it today, one movie buff could complain that it would have been better if Hitchcock had won the best director award that year for his equally brilliant "Psycho". Jack Lemmon is once again slightly coiled as the main protagonist C. C. Baxter while the jokes are not particularly hilarious, not by a long shot, yet it's still an amazingly touching, humane and moderately funny story that questions the system of values since its protagonist gets promoted just for giving his superiors a place where they can have an affair in peace, and even today one must get stunned by such a concept - what a story! Even more, it plays out around Christmas. Wilder's direction doesn't have any kind of mumbo-jumbo tricks, gimmicks, bombastic style or distracting "in-your-face" moments since all of his scenes that cause astonishment are simple character interactions - in one scene, Baxter is alone in a pub and doesn't even notice how some interested woman is "hitting" him with the paper wrappers by blowing through the straw, or just take the scene where he spots the almost dead Fran who tried to commit suicide in his apartment: moving over to the bedroom door, he opens it, tosses the clothes toward the bed inside not even looking at it, then freezes in a delayed reaction to turn back and spot her lying there unconscious; or when Kirkeby says to Baxter: "So you hit the jackpot, eh kid? I mean Kubelik-wise." - with such pure style one can almost conclude all those fast MTV-like modern techniques just reduced the quality of cinema, instead of developing it.