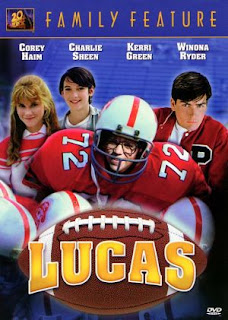 Lucas is an intelligent 14-year kid and social outcast who wears glasses, listens to classical music and is interested for locusts. Many school kids don't tolerate him and ignore or tease him, but Lucas tries to live with that and falls in love with the older teenage girl Maggie. But she adores the football player Cappie, Lucas' friend. Since he can't get angry at him, Lucas joins the football team where he gets mocked. When he looses in a game and ends in hospital, Maggie discovers he lives with a father alcoholic. His friends give him the team medal for efford.

Many teenage themed movies simply and superficially show their young heroes as attractive, happy, fun, carefree and idyllic. But the director David Seltzer cleverly and soberly decided to take a different approach and present a more demanding and complex teenage hero, one of those those kind of films ignored showing back in those days. Lucas is an outsider, a kid who is lonely and has difficulties interacting with his classmates, and such a picture of a "sad childhood" was something many authors would have ignored, but not here. Quite frankly, Lucas is a rather fascinating character: when he gets teased he manages to cope with that and even find a sense of humor in his situation, which could have influenced many other films, and Corey Haim is great in the title role. One of the best cliche twists is the football game near the finale - in any other given big studio film, the protagonist would have gained respect from the audience with the tiresome "hero wins the game in the last minute" cliche, but not here - actually, the resolution is rather painful. Still, the execution is slightly mediocre and sometimes enters into very cheap, pathetic scenes, especially in the ones where the kids bully Lucas, thus despite the happy ending "Lucas" isn't recommendable to children with the similar sensitivity.