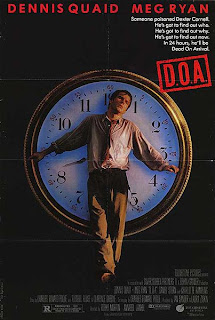 Professor Dexter lives on old glory: ever since he published an excellent novel, he just writes lousy ones since he doesn't have ambitions for anything. When he flat out refuses to read a synopsis from one of his students, that kid commits suicide by jumping from the building. That night Dexter drinks heavily with student Sydney, but when he wakes up he realizes he was poisoned and has only 48 hours to live. Even his wife was murdered, but Sydney is innocent. He finds out he was poisoned by his colleague who wanted to publish the work of the dead student as his own.

"D.O.A.", a remake of a 50s movie with the same title, is a thriller with mistakes that should not have been there. It's style is powerful, but under such an influence of heavy manneristic direction it became mechanically deconstructed to the point of anemia. It all starts with black and white photography and when the hero writes the word "color" on the blackboard it becomes a colorful, vibrant intrigue film noir that revolves around him finding he was poisoned and has only 48 hours to live. Dennis Quaid is good, but his role on the other hand is vain and irritating, while his search for his killer offer many interesting surprises. But the ending that reveals who it was is very disappointing, raising as many absurd questions as the scene in which Quaid's character 'captures' Ryan's character by putting glue on their joined hands! Despite ecstatic phisionomy and pretentious tricks, "D.O.A." is still a very correct and accessible film with enough virtues, except that the viewers after a certain time start longing for an ending more than they do want to cancel it to enjoy in the offered experience a bit longer.