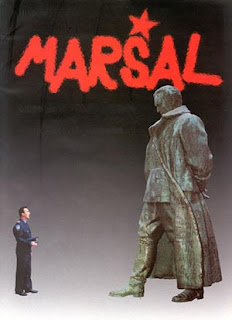 Police officer Stipan gets a mysterious assignment on his island: namely, a few inhabitants claim to have seen the ghost of Marshal Josip Broz Tito, the long deceased president of former Yugoslavia who once slept in a nearby hotel. In order to increase the number of tourists and cash in on that rumor, the inhabitants rearrange the whole town for the measure of Communism and bring Tito's old traditions back, which becomes a big hit. But the "ghost" turns out to be just the old Jakov, a man who escaped from a mental asylum and just thinks he is Tito. When agents Skulić and Mulderić demand from Stipan to end the charade, the old nostalgics put them in jail. Still, Stipan frees himself while "Tito" leaves on a ship.

Sympathetic comedy "Marshal" is superior to director Vinko Bresan's first film "How the War Started on My Island" both through quality and technology, and it also became a big hit by earning over a million $ on Croatia's box office. Cheerful, cute, full of accessible gags and twisted camera angles, "Marshal" is a good film with a few satirical situations. Still, some key elements are mediocre. Somewhere subconsciously, the viewer imagines Tito as a socialistic ghost that could in the story command the island, and thus gets a little bit disappointed that already somewhere half way through the film it all turns out to be just a mentally ill old man, which takes the dimension of esoteric and secrecy away from the film. Also, secret agents Skulic and Mulderic, obviously meant to be parodies of Scully and Mulder from the "X Files", were not used satisfyingly enough. In its core, it is a surprisingly well done satire about a "Communist pilgrimage" that subtly mocks commercialisation of ideological pilgrimages, making one character even add in one scene: "There were numerous apparitions in Lourdes, too", while the other replies with: "Yes, apparitions of Virgin Mary, but never of Tito!"