On the Silver Globe 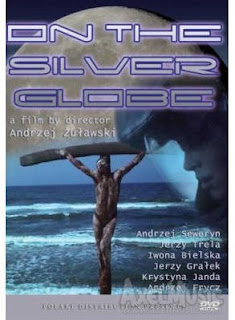 
A native of an unknown planet rides a horse through the winter landscape. He arrives in a castle where he reports to the human astronauts, who are worshiped, that something crashed from the sky...A group of astronauts crash lands on some planet. One of them, Tomasz, dies from his injuries, but the other three, including one woman, Marta, manage to survive and build an improvised cottage near the sea. During the years, Marta gives birth to numerous children who start to worship the last living astronaut, called the 'Old Man'...A few hundred years later, astronaut Marek lands near the tribe of the astronaut children who proclaim him their messiah. He leads them to fight the Szerns, humanoid creatures with wings living on the other side of the sea. After they get disappointed, the tribe members crucify Marek, just when the other astronaut Joszek arrives.

Andrzej Zulawski's cult Sci-Fi "On the Silver Globe" has a fascinating history that is even more interesting than the film itself: 80 % of the film was already finished back in 1977 when the Polish government suddenly stopped further shooting and forbid the director and the crew to finish it, until 10 years later he finally managed to complete it, even though the gaps between the missing scenes were filled with his off narration of the events. Still, that all didn't help in fixing it's real flaws, while the surreal "narration fillers" spoken in the background of out-of-place scenes of a beach, a bunch of people passing by the escalator and Polish buildings actually seem like a virtue since it's the only place of some kind of stable and tranquil charge in the midst of all the unbearable, non-stop madness. The story itself is brilliantly provocative, a hybrid mix between the thesis of Erich von Däniken in the human variation and a "Robinson Crusoe" space opera, filmed entirely without any special effects - the first third is the best since it is shot entirely like "The Blair Witch Project", as a shaky camera recording of the 4 astronauts who crash landed on some Earth-like planet and started to build their own tribe. Their exotic space suits and two land rovers traveling through the desert landscape create a bizarre mood, up until the point where they reach a forest by the sea and build a primitive home. Instead of a linear plot, the characters just speak random philosophical babble almost all of the time, like "The world is lost in our contemplation" or "You cannot think if you don't believe", which start to get annoying after a while.

The second part of the film starts on a different note, some time later when a new astronaut, Marek, lands on the planet and the astronauts' wild and superstitious children who formed a tribe proclaim him their new messiah. It's obvious Zulawski sends an atheistic message and the critique of fundamentalism and rigid laws, while his visual style consisting of unusual camera angles and bizarre shots is impressive, twisting the SF cliches in favor of ambitious tone. But it seems he is more interested in his new main protagonist Marek shouting almost of all the time or acting like a Kinski maniac and sending pretentiousness that crushes everything than to create some kind of a measure or control of the chaos that's going on around him, which results in heavy mannerism. Many scenes are totally wild - Marek speaks with the alien creature Szern that looks like a humanoid with dark wings and is chained to his cave; "infidel's" hang pierced on 30 foot tall spikes with their intestine hanging down; the rituals of the tribe - and while they have a sense at some point of the film, they start to drag during the course of the 157 minutes of running time. It's a fascinating and rare film with wild energy, yet it could have been crafted better.