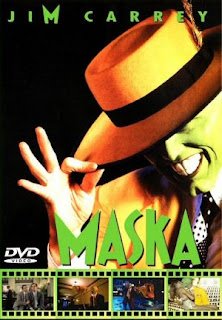 Edge City. Stanley Ipkiss is a nice guy who gets trampled by everyone. One day, while working in his bank, he meets the blond Tina who wants to open an account, but in reality just spies for her gangster boss Dorian who plans a big robbery. That evening he finds a mysterious wooden mask in the sea, puts it on and transforms into the Mask, a green faced super hero who can do almost everything. He robs the bank and has a wild night with Tina at a club. Even though he likes his new wild personality, Stanley decides to get rid of it. He gets arrested, but escapes from jail and manages to save Tina from Dorian. She and Stanley start a relationship.

Even though it's slightly forgotten today, Chuck Russell's "The Mask", loosely deriving it's plot from the variation of Carl Jung and his theory about the persona that is the mask presented by each individual to society and may or may not conceal the real personality, is still a surprisingly fresh and amusing light fantasy comedy with a neatly, refreshingly sustained performance by Jim Carrey and charming Cameron Diaz, who never looked more attractive, while the basic concept about a "zero who becomes the hero" is something almost anyone can identify with. True, some may ask themselves what the point of all the madness in the story was, but the film gains most of it's wacky charm through over-the-top cartoon humor of the Mask character who can do virtually anything, especially amusing in such funny scenes as the one where he stumbles upon a gang of street thugs whose leader asks him what time it is, and he flat out replies with: "2 seconds before I hunk your nose and put underpants on your head", which he does, or the scenes where he howls and turns his head into a wolf while observing the singing performance of Tina in a night club. Even though it's not especially hilarious and the fact that the too serious subplot about the gangster Dorian is completely out of place in the story, "The Mask" is still a rather fun comedy with an energetic hero, no matter how much he is just a copy of Genie from Disney's "Aladdin" and the Wolf from Tex Avery's "Red Hot Riding Hood".